Although the appetite among lenders for F&I products remains unchanged, there are products that are showing potential for good things when it does. Some of these products are relatively new to the market; others have been repackaged to include other products.

Anthony Gladney, finance director for a Ford outlet in Orland Park, Ill., knows a thing or two about how important his F&I income is to the dealership’s bottom line. His finance office accounts for 40 to 45 percent of his dealership’s total profit. And while a majority of his monthly F&I income comes from traditional F&I products, such as finance reserve, GAP and extended service plans, nearly 15 to 20 percent comes from ancillary products such as tire-and-wheel, dent-and-ding and key replacement programs.

“Without them you’re talking about a 20 percent decrease in profits, so it’s definitely worthwhile to have them,” said the 12-year F&I veteran, who’s been selling these products since 2000.

During the industry-wide decline in sales and front-end profits, F&I profits have never been more crucial. And while the usual suspects — finance reserve, GAP and extended service contract — are still products lenders are willing to fund, some dealers report that ancillary products, such as tire-and wheel protection, windshield replacement and key replacement, are resonating with consumers.

This was evident in a study F&I magazine conducted in January, during the toughest quarter for auto financing in 2009. Fifty-seven percent of dealers reported success with selling tire-and-wheel protection products, while 50 percent reported success with appearance protection products. Dealers also reported in the study that 42 percent of lenders advanced on tire-and-wheel, while 19.8 percent advanced on appearance protection.

“In order for dealers to maintain and expand their profit levels in F&I, they’re going to have to learn to sell more products,” said David Duncan, a senior executive at Safe-Guard Products International. “The consumers today demand value. They don’t get any value out of two points of rate.”

Bryan Kasper, vice president and general manager of the Ohio-based Kasper Auto Group, realized early on that cost played a major role in his customers’ acceptance of these new-wave products. Since March, his dealership has offered theft, environmental protection and combo appearance production products — which include windshield repair and replacement, paintless dent repair and roadside assistance — provided by the Cleveland-based National Automotive Experts (NAE).

Dealers can find ancillary products from a handful of product providers. But before jumping into the aftermarket pool, experts recommend that retailers examine customer demand and seek out feedback on the products from other dealers. That’s what Gladney did before he brought in the new products.

Gladney called a couple of out-of-state dealerships that sell the products and asked them for input on marketing, selling and claims handling. Hearing positive feedback from those dealers, Gladney decided to give the products a go. But before he did, he made sure the products were fully insured by their providers.

“We at the dealer level don’t want to offer our clients any product that’s not insurable,” he said. “We plan on being here for the long-term and we don’t want to pick up the pieces if a company goes out of business.” 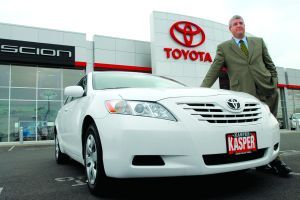 Selling to Customers and Lenders

If there was ever a product that demanded the F&I menu, it’s these new-wave products, said Kasper. The flexibility this selling tool provides not only makes it easier to present multiple products, but it also allows dealers to customize each presentation to meet a customer’s needs and budget.

“If you’re in a menu-based approach, you might as well have a product lineup that fits every consumer,” said Kasper, whose dealership achieved nearly $8,000 in profit in September and a 69 percent acceptance rate in aftermarket product sales.

Combo appearance protection products are especially well-suited to menu selling because dealers can present multiple products under one comprehensive package, which saves valuable real estate on the menu.

Texas dealer Gladney uses an “a la carte” approach to sell Innovative Aftermarket Systems (IAS) Multi-Shield program. The program offers a combination of appearance protection products — tire-and-wheel, door ding, windshield repair and 24-hour roadside assistance — which Gladney sells together or separately. “What usually happens is the customer wants one product, not three or four,” he explained, adding that he’s currently running at an 8 percent clip on used vehicles and 15 percent on new. “It could be a matter of budget, or a matter of a lender not allowing additional money to be financed.”

Another strategy being employed by dealers is offering combination appearance protection products on a complimentary one-year basis. The hope is these customers can be up sold to three- to five-year programs. “We’ve seen quite a spike in one-year giveaways,” said Jeff Jagoe, senior vice president of IAS. “Dealers spend on average $100 to $110 on the one-year program, and are successfully moving customers into the three- and five-year programs.”

But despite the success of some dealers, others may balk at selling ancillary products because of the challenges in financing, a problem that product providers know can hinder sales volume. “I know that providers like us have seen a big fluctuation with the limits banks have placed on deals,” said Kelly Price, president of NAE. “I think it really just depends on how the whole deal is structured.”

With the credit crisis putting lenders in the driver’s seat — some even pinning advances on whether a deal includes products they offer — DealerTrack Executive Robert Granados hopes dealers are using whatever dollar amount they can get toward big-ticket items like service contracts and GAP. The one product Granados thinks has some legs is identity-theft protection, especially with the advent of the Red Flags Rule.

“If F&I managers are disclosing the dealership’s identity verification process, then it’s a natural tie-in to selling the product,” he said. “Dealers can then emphasize that the product protects the customer and the dealership.”

Safe-Guard’s Duncan knows all too well the challenges dealers face in securing a F&I product advance, especially given that lenders categorize these ancillary products as line-one adds. But he says recent moves by automakers to capitalize on the potential of these new-wave products should be proof enough of their promise.

“Over the last couple of years, there’s been a real rush by the captives and OEMs to add these ancillary products,” he says. “So you’ve seen almost every captive over the last seven or eight years starting to offer GAP. You’ve seen the same thing happening with tire-and-wheel over the last three to four years. Dent-and-ding and windshield protection have received the same attention over the last two or three years. Key replacement is also gaining traction.

LoJack Connect family of services expands on the most comprehensive offering of vehicle management, recovery and connected car services, bringing value to dealers and peace of mind to drivers.

Tire Shield has selected the SEcureAdmin platform from StoneEagle F&I to manage all of its F&I products.