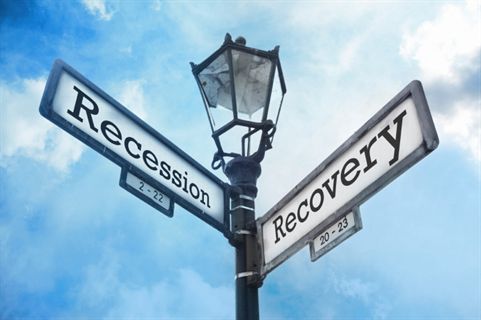 Partly fueled by the Cash for Clunkers program, the automotive finance industry showed signs of stabilization in the third quarter. And while lenders continued to make less risky loans, the prospect of those high-risk loans from a few years ago coming off the books in early 2010 provides reason for both optimism and continued caution.

Financing was still available across all credit tiers during the quarter, but there was a noticeable shift in funding between low- and high-risk segments, with low-risk credit tiers continuing to receive a greater distribution of vehicle financing. And while 30- and 60-day delinquencies continued to rise, the rate of increase did slow during the quarter. Providing further optimism was the increase in average credit scores for new originations. 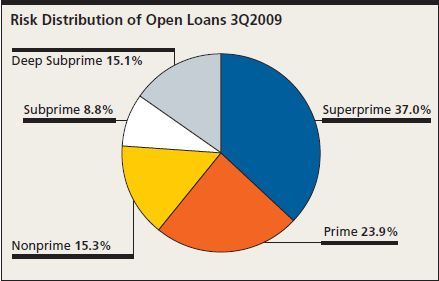 On a year-over-year comparison, the percentage of consumers classified in the superprime risk segment during the quarter held relatively steady, with only a slight decrease of 0.09 percent. This resulted in 37 percent of all open automotive loans falling into the lowest risk segment.

The combined prime and superprime market represented 60.9 percent of all automotive loans, up from 60.3 percent last year (a 0.92 percent increase). However, these risk segments have remained fairly steady throughout 2009. The middle-ground nonprime and subprime segments decreased by 1.2 percent from last year, with both segments representing 24.1 percent of consumers with automotive loans.

Meanwhile, the deep subprime segment continues to decrease, with 15.1 percent of open automotive loans falling into this category — a decrease of 1.3 percent from last year. 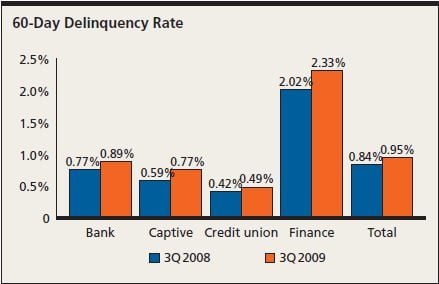 Despite stabilization in portfolio distributions and a shrinking deep subprime population, more consumers within the high-risk segments are experiencing delinquencies, resulting in a continued increase in the 60-day delinquency rate.

On a year-over-year basis, the rate of 60-day delinquent loans increased 13.4 percent. This resulted in 0.95 percent of all automotive loans reported as 60-days delinquent, representing over $6 billion in at-risk loans — a $477 million increase from last year.

The greatest increase in the 60-day delinquency rate was seen in the captive segment, which experienced a 29.2 percent increase. This resulted in 0.77 percent of all captive-held automotive loans reported as 60-days delinquent, representing more than $1.5 billion in at-risk loans — a $99 million increase from last year.

While credit unions had the lowest 60-day delinquency rate, they experienced the second-highest rate increase with 0.49 percent of their loans 60-days delinquent, a 16.7 percent increase from last year. 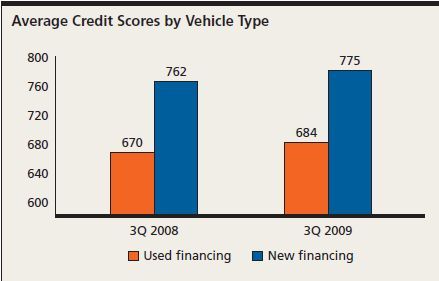 One reason why automotive portfolios have stabilized is the continued increase in credit scores for new-loan originations. Throughout the quarter, credit scores continued to rise for both new- and used-vehicle financing. The average credit score for vehicles financed in the third quarter was 722, an increase of 15 points from last year. 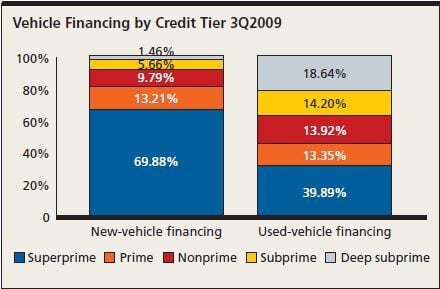 New-vehicle financing is significantly geared toward the low-risk consumer, with 83.09 percent of all new vehicles financed in the prime and superprime risk segments during the quarter. This was an increase of 7.08 percent from last year. In contrast, only 1.46 percent of new vehicles were financed in the deep subprime segment.

While distributed more evenly across the risk segments, used-vehicle financing experienced a greater shift toward the prime and superprime segments. Of all used vehicles financed in the third quarter, 53.24 percent of them were in the prime and superprime segments, an increase of 12.42 percent from last year. And while 18.64 percent of used vehicles were financed in deep subprime, this segment decreased 8.14 percent. 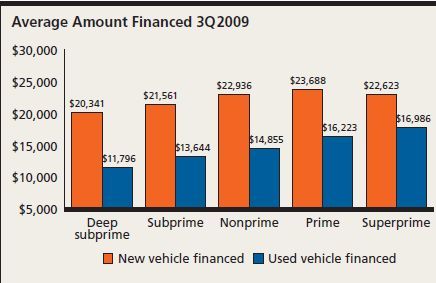 Cash for Clunkers Leads to Decrease in Amount Financed

Amount finance for the quarter is where the impact of the government’s Cash for Clunkers program was clearly evident. On a year-over-year basis, financing on new vehicles decreased $1,348 to $22,712 during the quarter. Consumers in the prime risk segment financed the greatest amount on new vehicles at $23,688, a decrease of $1,619 from last year. 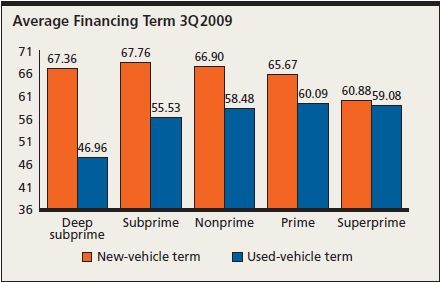 Across all risk tiers, the average loan term for the first half of 2009 was 60 months, down one month from last year. Terms between new and used financing continued to be one of the biggest differentiators across risk tiers, with a more than 20-month gap between new and used financing in the deep subprime segment. While terms vary considerably by credit risk tiers, each risk group saw decreases in monthly terms, with used-vehicle financing experiencing the greatest reductions.

The shortest terms were found on new vehicles financed in the superprime segment, which saw the average term drop by 0.55 months to 60.88 months. The greatest decrease in terms for new-vehicle financing was in the prime segment, which dropped 1.07 months from last year to 65.67 months.

Used-vehicle financing experienced the most significant decreases in terms. The deep subprime segment decreased 4.29 months, bringing the average term on used vehicles in this segment to 46.96 months.

While higher-than-average delinquency rates continued to challenge the industry, the fact that the rate of increase is slowing is definitely positive news for the industry. Slowing delinquency rates, increases in average credit scores for new originations, and portfolio stabilization should provide some cautious optimism for dealers continuing to refine their financing strategies.