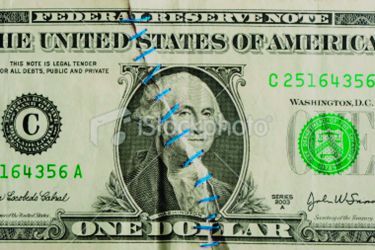 The auto finance industry spent most of 2009 on the mend. All lending segments — aside from banks — decreased their exposure from tiers outside of prime. By the fourth quarter of last year, delinquency and repossession rates began to stabilize, with signs of the market’s recovery beginning to emerge after one of the worst periods for the industry since the early ’80s.

Credit scores remained stable throughout the year, and new-vehicle financing became the domain of the prime customer. In contrast, consumers outside of prime were pushed more and more toward used vehicles, but even that side of the market was restricted. Average amount financed, term and rate all showed increases.

The good news is, the industry is no longer seeing the massive tightening that suppressed sales volumes and loan originations in 2009. The hope now is that the dramatic swings in consumer financing are now a thing of the past. 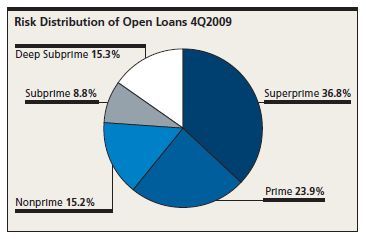 It was clear that finance sources shifted away from the higher risk segments, which experienced a year-over-year decrease in loan distributions. The only segment that remained stable was nonprime, while the subprime group decreased 3.15 percent to 8.8 percent of all open auto loans. Additionally, the deep subprime segment decreased 4.35 percent from the fourth quarter 2008 to 15.3 percent of all open automotive loans by the end of 2009. 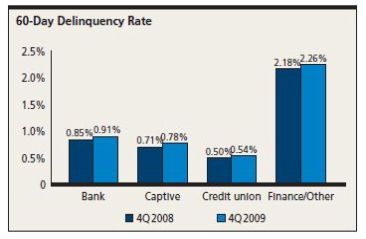 The greatest increase in the 60-day delinquency rate was in the captive auto segment, which increased 9.71 percent from the fourth quarter 2008 to a rate of 0.78 percent. The delinquency rate for the bank segment reached 0.91 percent, a 7.56 percent increase from 2008. 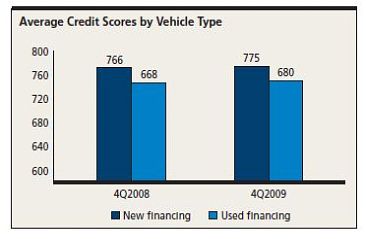 The tightening seen last year was most clearly demonstrated by the increase in average credit scores on newly originated auto loans. That increase is also the main reason why delinquency growth has slowed and overall credit has stabilized.

The average credit score on all vehicles was 715 in the fourth quarter 2009, a 12-point increase from 2008. And despite a nine-point year-over-year increase, credit scores for new financing remained very consistent throughout 2009. 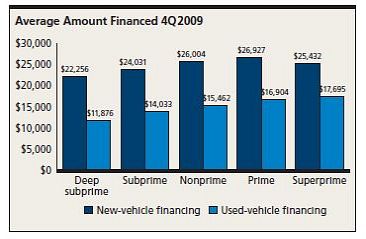 Typically, the amount a consumer finances increases as credit improves, which was the case for the fourth quarter 2009. Overall consumer financing for the quarter increased $766 from the previous year to $20,431.

In contrast, the average amount financed for consumers in the prime and superprime segments increased by more than $1,000 ($1,153 and $1,327, respectively) from the year-ago period.

Tiers Outside of Prime See Declines in Monthly Payments 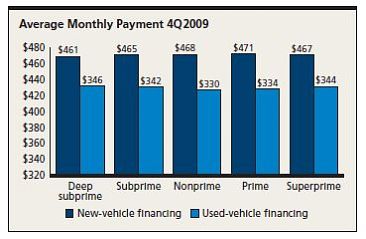 Monthly payments experienced a year-over-year increase for both new and used financing, with the average payment rising $2 to $467 for new and $3 to $340 for used in the fourth quarter.

Looking at financing across all risk segments reveals even more significant changes in payments. For instance, payments on new vehicles decreased for all risk segments outside prime, with the most significant decrease seen in the deep subprime segment. The monthly payment for that tier fell $16 to $461 for the end-of-year quarter.

Payments on used-vehicle financing mirrored the behavior of new financing, with decreases seen on all segments outside of prime. The most significant decrease was in the deep subprime tier, which fell by $6 in the fourth quarter 2009. 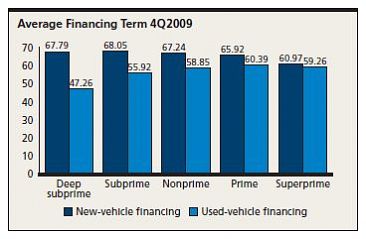 A wide view of the market shows that finance term was one data point that changed very little on a year-over-year basis. However, reviewing term by risk segment tells an entirely different story. Overall, the average term remained constant at 60 months for all vehicles, 62 months for new financing, and decreased one month to 57 months for used financing.

Although new-vehicle terms experienced very little change, used-vehicle financing changed considerably for the high-risk segments. Overall used-vehicle terms decreased in the fourth quarter, with deep subprime falling by three months to an average of 47.26 months. The subprime segment dropped 2.46 months to 55.92 months, and nonprime decreased by 1.27 to an average term of 58.85 months.

The auto finance landscape continued to shift in 2009 after the market plunged in late 2008, but there were strong signs of overall stabilization. Nonetheless, the market remains challenging for consumers looking to obtain financing,
especially those who fall in the high-risk categories.

Additionally, expect finance amount and loan terms to continue to evolve for the high-risk loan segments as lenders increasingly adopt risk-based pricing strategies. The increasing use of those tactics was one of the main reasons used financing tightened for all categories outside of prime. The combination of auction values holding strong at the end of the year and the deceleration of delinquency rates, however, should help the market going forward.

Dealers should expect the new-vehicle side to remain the domain of prime consumers, with tiers outside of prime gaining some share in the smaller, budget-car categories. The hope is that the whipsaw dealers and auto finance sources experienced at the end of 2008 and into 2009 will become a distant memory, but it’s clear the dramatic swings are behind the market.

Melinda Zabritski is director of automotive credit for Experian Automotive. She can be reached at [email protected]

Lease credit approvals reached 72.9% in March; Up slightly from 70.8% in February.

Consumers Shifted Credit Payment Behaviors in the U.S. and Other Global Markets as a Result of COVID-19

Car Capital allows their dealer partners to make immediate modifications to deal terms in real-time based on the economics of each unique car and consumer.

The market experienced record-breaking price increases this past week, as the supply and demand imbalance continued to drive up wholesale prices.