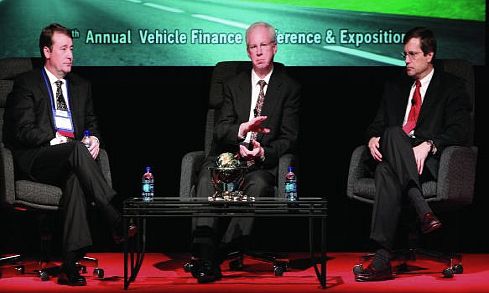 In February, major players in the auto finance business gathered for the American Financial Services Association’s 14th Annual Vehicle Finance Conference and Exposition, held before the annual dealer conference in Orlando, Fla. If you’re curious as to the overall tone of the conference, consider the following sound bites:

One speaker described last year as “the worst since the ’30s,” but completed his thought by saying the worst is behind us.

Another speaker confirmed what many dealers already knew when he said, “We were scared last year.”

A third speaker, representing a major captive lender, said what dealers have been waiting to hear: “We have to keep loaning out money. We affect 10 percent of the U.S. economy.”

The message was clear: Things are getting better. What that improved outlook means for automotive retailers and, more specifically, business offices across the country, remains to be seen. Whatever you conclude, having more lenders in the game can only mean more vehicles delivered and more revenue for the business office and the dealership as a whole.

One of the reasons lenders were in a better mood is the stabilization of delinquencies and repossessions. And while many finance sources intend to move forward cautiously, they still believe in the importance of building solid relationships with dealers and their business managers. The difference this time around will be an increased emphasis on building trust.

If you haven’t noticed, it now takes longer to secure an approval or a conditional approval. In many instances, lenders are verifying information prior to sending a callback. That’s why it’s crucial going forward that F&I managers are sure the information they provide lenders — including income, job and time at residence — is accurate. You might even want to take this a step further by providing lenders with the name and direct phone number of the person who can verify your customer’s job and income information.

Another common theme at this year’s show was customer participation. “If the customer is not willing to participate in the purchase of his or her new vehicle, neither are we,” said a representative from a nationwide lender.

Remember when lenders freely financed loans with no money down? Well, they did so because most of those customers didn’t pose a serious risk at the time. Unfortunately, when the economy took a turn for the worse, many of those customers — particularly those with good credit — became delinquent on their payments, some of them to the point of repossession. This left many lenders with vehicles worth more than retail book value 12 to 18 months after the loan was originated.

The ripple effects of those fast times are still being felt today. Several lender representatives at the conference mentioned the possibility of charging dealers for accepting credit applications. That’s certainly not forward progress, but the cause is clear: Dealerships are in the habit of sending every application to every lender, every time. Finance executives would prefer that dealers target specific lenders for specific customers.

Now, there is potential for an even worse scenario: Lenders may begin limiting dealer participation or move to 100 percent flat fees. Both were topics of discussion at this year’s conference. In fact, one representative with AFSA raised the specter of self-imposed limits and suggested going exclusively with flat fees. The fact is, this has been a long time coming. There is no timeframe for this change, whether it’s brought about by state and federal legislation or self-imposed limits. However, it’s critical that F&I managers begin focusing on product sales while reducing their reliance on finance reserve.

There was also talk about the new Risk-Based Pricing Rules under the Fair and Accurate Credit Transaction Act, which go into effect Jan. 1, 2011. As covered in recent issues of F&I magazine, the rules will require creditors — including dealers — to provide notices to consumers who receive terms less favorable than those granted to others because of derogatory information contained in their credit reports.

The Federal Trade Commission’s Website, www.ftc.gov, does provide some guidance on what the notices must contain. Speakers at the conference said credit reporting agencies are working on letters for dealers as well. So be sure to monitor F&I’s coverage and news from the agencies themselves to see when those might be available.

Overall, the mood this year was upbeat and positive. It was a stark contrast from the somber mood at last year’s conference. Even though business as usual won’t be coming back anytime soon, it’s evident that finance sources are ready to lend again. But before they do, they’ll need to once again believe in the F&I manager, the customer and the merit of the deal. If you can focus on building and securing those relationships, you should be well on your way to securing funding for more customers this year and beyond.

Tony Dupaquier is the director of F&I training for American Financial and Automotive Services Inc. He can be reached at [email protected]