Founded in 2002 by the financing arms of DaimlerChrysler, Ford, General Motors and Toyota, RouteOne isn’t taking recent moves by its competitors lightly. In fact, as they continue to move into its space, the technology provider is quietly impeding on theirs. This month, Mike Jurecki, president and CEO of RouteOne, discusses the company’s recent moves to expand its footprint in the Internet sales and used-vehicle space, actions he says are driven by market dynamics and not the need to match the play of its biggest competitors.

F&I: Is it me, or are things really heating up in the credit-platform arena?

Jurecki: Well, it’s never really cooled down. There’s always been a lot going on. We still continue to sign up lenders at a pretty rapid pace. Today, we have more than 400 lenders on our platform. Obviously, Open Dealer Exchange has entered the marketplace, and DealerTrack’s not sitting still. So, from our vantage point, it’s always been fairly competitive, and I don’t see that changing anytime soon.

F&I: What are your thoughts on DealerTrack paying $15 million to get GMAC on its credit platform?

Jurecki: Well, you certainly can’t blame DealerTrack for pursuing our owners. They’re all big accounts, and if I were them, I’d be doing the same thing. As for writing a $15 million check, well, that’s a pretty large amount of money. Commenting beyond that wouldn’t really be appropriate for RouteOne.

As for us, we’re coming off a record month in March and we’re going to continue to focus on growing our share of the business. Last year alone we grew our market share by 12 percentage points in the non-captive space, and we’re going to do everything we can to keep that number positive.

F&I: GMAC’s Tim Russi said one reason the company made itself available on DealerTrack was because it’s focused on the used-vehicle market. Do you expect that segment to play a big role this year?

Jurecki: Coming out of the recession, I think we’ll see the used-car market improve before the new-car market does. But I think things are going to level off at some point. Our footprint in the used-car market has historically been limited to stores associated with franchised dealerships. However, I think it’s important to note that approximately 50 percent of our applications are for used cars. Obviously, we have a number of finance sources that focus on that space, as well as the nearprime and subprime segments.

F&I: You recently increased the number of nonprime and subprime finance sources on your platform with the addition of Nationwide Acceptance and Regional Acceptance. Were those announcements about matching the dynamics of the marketplace or the play of your competitors?

Jurecki: I wouldn’t say it was an effort to match them, as we’ve always aggressively pursued a full array of lenders. We’ve had AmeriCredit on for quite some time, as well as Capital One, Citi, Drive Financial, Wells Fargo, US Bank Special, Westlake, Condor, and Chase Custom.

As I said, we have played in the non-franchised space as well. However, I will tell you that we do see some opportunity to move more aggressively in that space than we have in the past. We definitely think we have the right set of lenders and the right service model to do that. And don’t forget, we have three platforms servicing that space that we supply the plumbing for: Finance Express, AppOne and NOWCOM. Historically, that’s how we’ve gone to market in that space, but we’re also considering a bigger footprint there as an individual player.

F&I: Was that the reason behind your recent agreement with the Pre-Owned Automobile Dealers Alliance (POADA)?

Jurecki: Yes. We just felt it made sense to be with POADA if we were going to go after independent dealers. So, that is an important part of our go-to-market approach.

F&I: Dealers say it’s still a challenge to get nonprime and subprime customers done, while my lender sources say things are getting better. What are you seeing?

Jurecki: We are seeing some growth, but I think it’s still a challenge. There are certain lenders that are opening up a lot more than others. But as a whole, I think we’re seeing some slow improvement in that space.

F&I: How about lending in general? Are things loosening up?

Jurecki: What we’re seeing out there is some lenders getting back into the market. It seems like the focus is not so much on expanding their footprint, but building share within their existing footprint. A few companies are expanding geographically, but it’s been slow and we think it’s going to continue at that pace.

F&I: Let’s talk about the Internet. How has it changed the retail game?

Jurecki: Well, I think everyone knows there is a high level of research that takes place on the Internet prior to purchasing a vehicle. Obviously, that’s going to continue, but I think there’s a desire for that to evolve to the point where we’re getting further into the actual transaction. That includes credit approval and, potentially, the purchase of insurance and ancillary products. However, I’m not sure we’ll ever get to that point, but we are certainly developing products to help on an indirect lending basis. 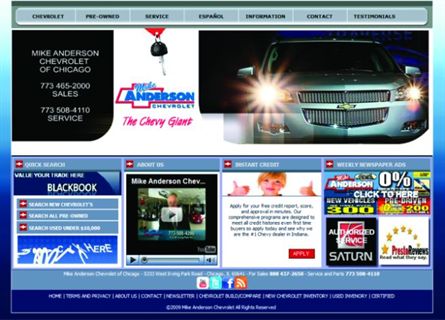 F&I: I take it your WebApplyOne product is a good example of that.

Jurecki: That’s correct. See, one of the things we’ve heard from our customers is that it’s tough to make money on Internet customers because they often walk in as cash customers. WebApplyOne gives the dealership a chance to provide financing to that customer before they walk in with a check. So, what happens is, the application comes down, the customer fills it out, and we direct that application to our Deal Manager system, which then provides that lead to the F&I department, the dealership’s CRM system, or the dealership’s Internet sales team.

What’s slick about this product is our ability to ensure that the data gets to all the right people all at the same time — whether or not we have integration with the dealership’s CRM. In fact, the way the process is built, we allow that data to be sent to up to three individuals within the dealership in addition to the CRM system and our Deal Manager.

F&I: So, do you think the National Automobile Dealers Association’s prediction of 11.9 million units sold this year is realistic?

Jurecki: We have a budget based on 11.5 million units, so 11.9 feels fairly realistic to me. As I said before, we’re coming off a record month in March in terms of applications, so that’s definitely a good sign. We don’t know if the industry can sustain what happened in March because, as you know, incentives really fueled sales. I will say that there are a lot of auto dealers and finance companies in the marketplace that are a lot more optimistic than they were six months ago.