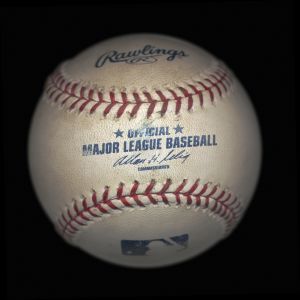 Before I tell you about a new section I hope to kick off within the next few issues, I want to tell you a little story. See, ever since I attended my first Dodgers game at the age of five, I have only wished for two things: extra innings and to catch a foul ball. Well, after 30 years of studying the competition, I finally got my foul ball, well, sort of.

The ball sits next to my keyboard as I write this editorial, a testament to all those years I spent in the nosebleed seats waiting for my chance. Yes, I watched those lucky kids with envy as their dads handed them the ball, but I also studied how it was done. Luck played a big role, but there were things I observed that I thought could help my chances.

Well, my opportunity to test my theories came on April 18. A family friend was going out of town and offered me four box seats located right behind first base. Of course, the wife had to go, but it was a sacrifice I was willing to make. As for the two remaining seats, well, that’s when Operation Foul Ball went into effect.

See, I knew I had two chances of getting a ball. I either had to catch one or get one of the players to toss the ball my way at the end of an inning. Past observations told me that the probability of that happening increased if I had a young kid with me. Luckily, my seven-year-old nephew was available, but that meant I also had to invite my sister — another sacrifice I was willing to make.

Now, my role was most important. See, I had come to realize that baseball players choose their targets carefully. What they’re looking for is a capable adult to catch the ball for the kid. To distinguish myself from the other adults in the stands, I brought along my Rawlings Gold Glove Series infielder’s mitt. Hey, I wanted the player to know I was serious.

I let my wife, sister and nephew in on my plan when we got to our seats. My wife’s job was to not get in the way. My sister’s job was to catch the player’s eye — “Show him a little something,” I told her. As for my nephew, his job was simple: All he had to do was look like the ball was meant for him.

Well, with two outs, Dodgers right fielder Andre Ethier sent a warning-track shot right into the glove of Giants center fielder Andrés Torres. My wife and sister jumped and cheered to get Torres’ attention as he made his way toward the dugout, while my nephew jumped in his chair and waved his glove. Just as I expected, Torres began scanning the crowd, so I pounded the glove and gave him a good low target. Then it happened; Torres slung the ball right into my glove.

Lucky? You could say that. I prefer to say my plan worked to perfection. You auto dealers who survived last year probably feel the same way. It wasn’t a matter of luck. You made plans and adjustments to increase your chances of success.

What I’d like to do with the new section I mentioned is publish some of those strategies, but I need your help. Now, you can tell me about a new process you’ve implemented, new closes you’ve created, and even a new Internet or marketing strategy your dealership is employing. To make it easy, follow this simple template:

The Goal or Problem Addressed (50 words):

Along with your tip, which you can e-mail to me at [email protected], I’d like to get a photo (at least 3 inches across at 300 dpi) of you and your dealership.

Now, for those individuals whose tips grace the pages of F&I magazine, I’ve been cleared to offer you a free pass to our F&I Conference and Expo, scheduled for Sept. 14-15 at the Paris Las Vegas hotel. This offer runs until July 30, so don’t delay. The ball and I will be waiting for your e-mails.