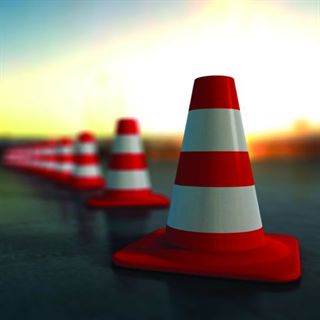 During the first quarter, like vehicle sales, the auto finance market continued to show signs of a rebound from the shakeup of 2009. However, first-quarter results also revealed a market that remains restrictive to the outside-of-prime credit tiers.

Prime customers continued to draw the lion’s share of new and used financing during the quarter. Average amount financed increased, loan terms stabilized and average rates decreased. The overall improvements in the first quarter are encouraging for the rest of the year, but challenges remain. 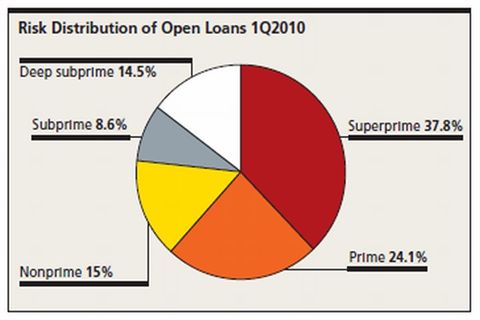 The deep subprime category realized the greatest year-over-year decrease, falling 7.62 percent to 14.5 percent of all automotive loans. The subprime and nonprime segments dropped by 2.71 and 0.72 percent, respectively, bringing their percentage of automotive loans to 8.6 percent and 15 percent. 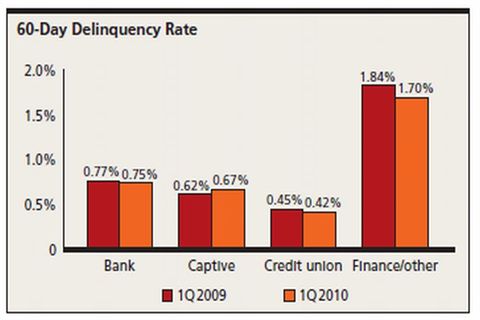 With lenders showing a preference toward prime customers, the 60-day delinquency rate decreased 0.82 percent on a year-over-year basis to 0.78 percent. Bear in mind that, while the actual decrease in the delinquency rate is still relatively small, the total dollar balance associated with these loans has decreased by 19.8 percent, bringing the total 60-day balance to just over $1 billion.

Unfortunately, while delinquencies are down overall, captive automotive lenders are still experiencing increases. Delinquency rates for the segment increased by 8.96 percent to 0.67 percent. However, captives also realized a 13.9 percent decrease in their at-risk balances, resulting in $181 million in 60-day delinquent loans.

Meanwhile, banks, credit unions and finance companies all experienced decreases in their delinquency rates. The most significant improvement was seen among finance companies, which declined 7.89 percent to a 60-day rate of 1.7 percent, which was still the highest of all the lending segments. The finance segment also saw the biggest decrease in 60-day balances with $355 million at risk, a year-over-year decrease of 26 percent.

The 60-day delinquency rate among captives dropped 6.03 percent to 0.42 percent, the lowest rate in the industry. And with 12.7 percent of their balances delinquent, credit unions decreased their at-risk balances by 16.4 percent to a 60-day delinquent loan balance of $102 million.

The 60-day delinquency rate for banks fell to 0.75 percent, a decline of 3.52 percent on a year-over-year basis. Banks now hold nearly 36 percent of the at-risk balances with $387 million in 60-day delinquent loans, a 20.7 percent decrease from first quarter 2009. 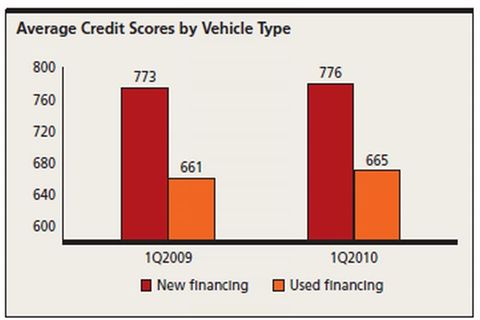 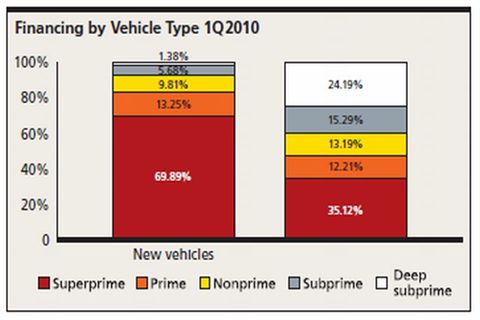 Along with higher credit scores, the overall distribution of vehicle financing continues to shift into the prime and superprime risk segments, with more than 59 percent of all financing in the first quarter falling into these low-risk segments — up 2.9 percent from last year. Deep subprime now represents only 16.58 percent of all vehicle financing, a decrease of more than 7 percent from first quarter 2009.

New-vehicle financing is clearly geared toward the low-risk consumer and continues to show signs of further tightening. In the first quarter, 83.14 percent of all new vehicles were financed in the prime and superprime segments, an increase of 1.04 percent from last year. Further, credit contraction was evident in the growth of the superprime segment, which increased 2 percent to 69.89 percent of all new-vehicle financing. Meanwhile, only 1.38 percent of new vehicles were financed in the high-risk, deep subprime segment.

Used-vehicle financing, while distributed more evenly across the risk segments, experienced growth in all risk segments except deep subprime. Of all used vehicles financed in the first quarter, 47.33 percent of finance transactions were in the prime and superprime segments, an increase of 2.37 percent from last year. And while 24.19 percent of used vehicles were financed in deep subprime, this segment decreased 4.8 percent.

Amount Financed Up; Except for Highest Risk Tier 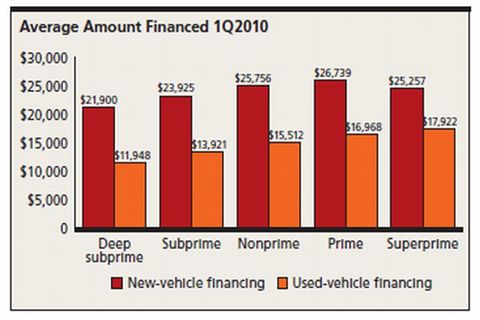 The greatest amount financed for new vehicles, $26,739, was seen in the prime segment, while the superprime category realized an increase of $1,332, leading all tiers on a year-over-year basis. Experiencing the only decrease was the deep subprime segment, which represented the smallest percentage of financing. The lending tier experienced
an $83 decrease, bringing the average amount financed to $21,900.

Used-vehicle financing increased across all risk segments. The greatest increase in the average amount financed was seen in the superprime segment, which jumped $1,281 to $17,922. 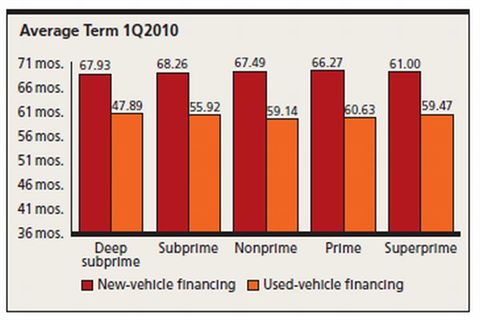 Loan terms also have experienced some loosening this year, increasing by one month across all risk tiers to an average of 60 months during the quarter. Terms for new-vehicle financing increased slightly for deep subprime (up 0.48 months), subprime (up 0.10 months) and superprime (up 0.51 months). The longest terms were found in the high-risk segments, with subprime loans averaging 68.26 months.

What was clear during the first quarter is that auto finance continues to stabilize after a tumultuous 2009. Credit quality is holding strong as the American consumer continues to do a better job of making payments on their auto loans. This gives lenders more reason to remain optimistic about the market, especially as they begin to see improvements in portfolios and loss rates.

In the near term, however, expect lenders to remain much more risk-averse than they were two or three years ago. That means dealers will still need to look a little harder to find the right lender relationships for their markets. It also means dealers will need to educate their customers about changes in loan terms so they are comfortable and confident about their financing options.

Melinda Zabritski is director of automotive credit for Experian Automotive. She can be reached at [email protected]