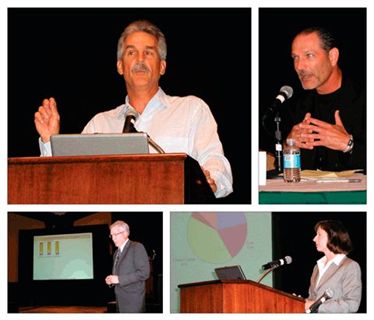 A new term was unveiled at the National Auto Finance (NAF) Association’s 14th annual conference: “below-prime auto financing.” The change is symbolic of the industry’s push to rid itself of the negative connotation associated with the terms “nonprime” and “subprime.” So far, according to show presenters, it’s working.

Even the association’s conference reflected the change, which was held June 2-4 in Fort Worth, Texas, under the “Below-Prime Auto Financing Conference” name.

“In the office, we call it high-yields,” joked Dan Berce, president and CEO of AmeriCredit Corp., during his keynote address at the conference. “Many pundits wrote off subprime auto. By contrast, our industry survived.”

Plenty of evidence pointing to a market rebound was presented during the course of the two-day event, but three dealer panelists reminded the lender-filled audience that the rebound has yet to reach their doorsteps.

No Value for Dealers

The biggest issue confronting dealers is the value-selling movement. Consumers are flocking to information Websites and arming themselves with pricing data. That’s killing dealer margins, and still-tight lending practices are making it difficult to fill the profit gap with F&I product sales.

“We’re trying to learn how to operate with more transparency,” said Jeff Enright, managing partner of Dallas-based Park Cities Ford-Lincoln. “It’s tough to find inventory. The new-vehicle side is being impacted by the Internet. On the used-car side, customers are finding prices on the Internet, which is cutting into margins.”

Kurt Hornung, a regional F&I director for AutoNation, said he has hired 32 F&I managers in response to the 22 percent increase his Texas region experienced in May. His stores are selling more cars but, as he said, “That doesn’t mean the profitability is popping back.”

The situation is worse on the special finance side of the business.

“We, today, have as many customers in subprime as we did one year ago, three years ago,” Hornung said. “But we can’t get them financed.”

Enright agreed, saying his special finance business is only one-third of what it once was. The problem is his operation can’t make enough on the front and back end of deals. “We still want to do that business,” he said, “but when you can’t make the money …”

The good news is that the asset-backed securities (ABS) market is open once again, with investors shifting from just talking to closing deals, said Lain Gutierrez, partner and co-founder of New York-based Cold Street Partners.

“Since July 2009, the market has continued to accept below-prime auto ABS,” he said, touting securitizations by eight sources, including AmeriCredit, Prestige, Tidewater and Santander. “Spreads are widening, making it more lucrative for investors.”

Requirements for selling securities on the ABS market haven’t changed much, but investors and their analysts are taking a closer look at the lending practices of finance sources. What they really want is a better read on how those portfolios will perform
going forward.

The one thing that could change things is the Securities and Exchange Commission’s proposed Regulation AB. Among other requirements, it would require that ABS issuers retain 5 percent of the risk as a condition of sell eligibility. The biggest change would involve private companies, as the proposed regulation would require that they disclose their business practices and performance to access the ABS market.

Through May 31 of this year, 24 transactions on the ABS market have been completed to the tune of $19.14 billion. That’s a marked increase from the 11 transactions, worth $13.15 billion, completed in all of 2009. More importantly, said Amy Martin, a senior director with Standard & Poor’s, the expiration of the Term Asset-Backed Securities Loan Facility had little impact on investor appetite.

“Not only are investors buying subordinates, they are buying subprime auto,” said Martin, who added that April marked the rebirth of subprime auto ABS. “Subprime and below-prime lending has been on its way back since late last year, and nothing that’s happened this year has changed that.”

The key, she said, has been tighter lending standards, which led to 95 upgrades of auto-related securities last year and 42 through May 26.

One company that has benefited from the turnaround is AmeriCredit, which has been the beneficiary of 10 of those upgrades. As Berce said, it’s a testament to what his company learned during the downturn.

“I feel much better standing here today than I would have a year ago,” said Berce, who described AmeriCredit as being on its fourth corporate life. “I think the positive trends are in place and are sustainable.”

Mispriced loans led to the company’s first near-death experience in the early ’90s. The company then used up its second life weathering the recession of the early 2000s. AmeriCredit’s third life was claimed in December 2007, when the credit crisis claimed the bond insurance industry and shut down the ABS market.

What companies like AmeriCredit have learned is that cash is king in the auto finance business. Companies also know they have to be proactive, maintain transparent communications with dealers, investors and partners, and stay in tune with collections activity. More importantly, finance sources now realize that they must maintain disciplined origination practices, which was clear from the results of the NAF Association’s annual below-prime survey.

The study — which garnered 25 respondents, the most since 2007 — revealed more disciplined behavior in 2009 than in years past. Advances are more rational, with amounts financed for new and used originations dropping by $449 and $496, respectively. Loan-to-value ratios also have tapered off by 3.4 percent since 2007.

More importantly, according to Rich Apicella, an executive with Benchmark Consulting International, which conducted the survey, companies are more profitable. He pointed to the fact that pre-tax income on portfolios was up 14 percent last year.

“There’s been some consolidation, but what we’re finding is the companies that remain are stronger and more profitable,” Apicella said. “This bodes well for dealers because they’ll have a reliable source of funding.”

Apicella said delinquencies were higher but “under control.” The study also revealed that terms for new originations increased by one month, while terms dropped by a month for used. Thomas King, senior director at J.D. Power and Associates, said 60-month terms are quickly becoming the norm, as manufacturers continue to minimize the use of 72-month terms.

King, who provided an industry outlook, believes the industry will realize 40 percent or more growth by 2012, but thinks the industry may never see total sales eclipsing the 17-million mark like it saw earlier this decade. His prediction is driven by the rise in transaction prices, which have jumped by $1,500 since 2007.

“We believe even the volume levels seen in 2000 were elevated by incentive levels, so we think it will stay around 12 million,” said King. “The reality is, if the industry was still strong, we wouldn’t see this transaction price trend.”

King said what contributed to the drop in sales is the spike in the average age of buyers, adding that younger buyers were basically taken out of the market in 2009 as banks tightened guidelines. So far this year, said King, the number of buyers under the age of 25 has dropped by 38 percent, while buyers between 35 and 55 decreased by 28 percent.

“Mature, good credit consumers pay more, which is keeping the industry going and companies afloat,” he said. “But we need the younger customer to come back.”

AutoNation’s Hornung offered his own solution. “What would absolutely drive business is if our lenders came in and reviewed deals … so we understand what you want,” he said. “The lenders that will get more business are the ones that do more than the coffee calls.”