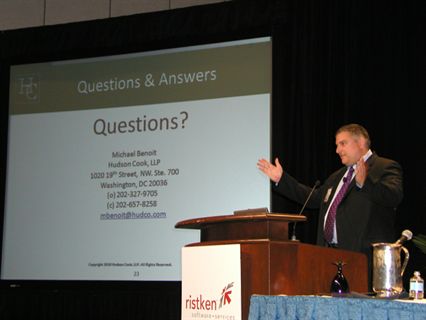 Some dealers won exemption from financial services reform, but those who attended the magazine’s annual conference learned that regulators still have plenty of “back doors” to dealerships. Speaking in Las Vegas at the F&I Conference and Expo, attorney Michael Benoit of Hudson Cook LLP said the full impact of the Dodd-Frank legislation won’t be known for another six to eight months, or until regulators draw up the rules the Bureau of Consumer Financial Protection will enforce.

“The act carves out the business of insurance by saying that it is not a financial product or service for purposes of regulatory jurisdiction of the CFPB,” said Benoit. “However, there’s a back door [as to how] that’s going to affect you, and that is through the regulation of finance sources.”

The good news is that the people tasked with writing those rules are the same individuals the credit industry has worked with before, but Benoit said the regulatory picture for auto finance won’t be clear until a director of the bureau is named.

As for dealers, Benoit said the legislation does not remove any of the rules currently governing F&I offices. However, it does empower states to enact new requirements.

“A major piece of the legislation stated that attorneys general now have the ability to enforce the Consumer Financial Protection Act and any of the bureau’s rules,” he said, adding that he expects pre-dispute arbitration to be one of the AGs targets. What concerns Benoit the most is that the legislation now allows regulators to acknowledge publicly when their investigating a business.

Benoit said regulators will also need to clarify the language used for the dealer exemption. For instance, he wondered what the Dodd-Frank legislation means when it says the bureau will not have authority over dealers who are “predominantly engaged” in the sale, leasing and servicing of motor vehicles.

Benoit also wondered what the legislation means when it says the exclusion doesn’t apply to dealers who provide a financial product not related to a financial transaction. “Most of the things in the dealer’s F&I arsenal probably don’t violate the exclusion, but remember, financial product and service has a very broad definition,” he said. “The perfect example is offering a credit card to the customer from another bank or something like that. That could put your entire exclusion at risk.”