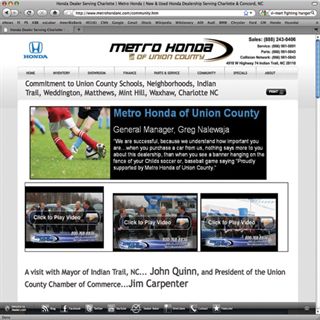 Social media hit the mainstream in 2010. Some dealers embraced it, others were frustrated by it. For the dealers who found success with this new word-of-mouth marketing medium, the winning formula was simple: less pitch, more engagement.

Trying to use social media as an extension of your traditional marketing efforts will only get you so far. You can’t build an online community with advertising dollars and costly promotions, but that doesn’t mean that type of “community marketing” doesn’t have its place in your marketing strategies. Those types of promotions do get things moving. The problem is that participation stops in its tracks once the promotion ends.

By anchoring your social initiatives into something larger than your brand — a higher calling, if you will — you can create a common bonding point between your dealership and your market. That’s the best way to increase your ROI — and I don’t mean return on investment. Community outreach creates what I call “return on influence.”

All this talk about passion and outreach might sound like pie in the sky, but it works. Just ask the team at Indian Trail, N.C.’s Metro Honda of Union County. The dealership sprang into action last year after Walmart launched its nationwide “Fighting Hunger Together” campaign. The big-box retailer promised to donate $1.5 million to six communities that Facebook users would vote on from a list of 100. The leading community would be awarded $1 million and the other five would get $100,000 each.

During the campaign, which ended in December, Metro Honda created videos, sent out e-mails and engaged its Facebook fans to attract as many “likes” — each counting as one vote — to its community’s page as it could. The strategy worked. The dealership’s number of daily active users (i.e., people consuming the dealership’s content) increased from an average of 200 per day to more than 1,000, and its daily post views on Facebook increased from about 5,000 per day to upwards of 25,000.

As you look for a cause to support, make sure you find one that aligns with what your dealership is all about. You don’t want your community members to think you’re exploiting a cause to sell more cars. Be sincere in your efforts to raise awareness. That might sound counterintuitive, especially since marketing is all about pushing your brand’s agenda, but the goal of social media marketing is to spur organic growth and create goodwill.

Remember, there is more to your dealership than the lot it sits on and the inventory it moves every month. There also are people who make up the business, and it’s these people that will be your connection point with your customer base. You can foster this connection by redeveloping the core message of your dealership to something that goes beyond selling cars, service and F&I products. What you want is a message people can rally around and become passionate about.

David Johnson is director of e-commerce for Next Generation Dealer Services, a firm specializing in special finance training. He can be reached at [email protected]