Back in 2009, Brian Benstock’s wife called to notify him that his credit card was declined when she attempted to make a purchase. Believing it was a mistake, he called the bank. Its response was an even bigger shock: "Mr. Benstock, we stopped your card for fraud alert. You have $60,000 worth of charges in the past two weeks — from Facebook."

Benstock, vice president and general manager of Paragon Honda and Paragon Acura in New York, says that was the day he learned firsthand the true power behind the social media network. He had taken out paid advertising with Facebook just two weeks prior after deciding that his dealer group was ready to pay per click (PPC) on Facebook for his "dollar per day" campaign, which asked customers if they would buy a new vehicle if they only had to pay $6 or $7 a day.

"They asked me what size market I wanted," Benstock recalls. "I’m kind of aggressive so I said, ‘Give me 500 miles around the dealership.’ They said, ‘Are you sure?’" Benstock has since tweaked the per-mile radius to target a more localized market, but he said the general strategy was and has remained effective.

Paid ads, though, comprise only a portion of Paragon’s online presence. Its Honda and Acura stores, which claim the top spot for Honda and Acura certified pre-owned sales in the world, boast more than 3,000 and 1,500 "Likes," respectively, with both Facebook pages monitored by Digital Air Strike (DAS), a digital marketing firm that offers a reputation management solution to dealers.

Toyota Sunnyvale in California is another success story in DAS’ books. Despite the store’s progress, Mike Shum, general manager at the Bay Area store, admits he struggles with the thought of taking out paid advertising on the social networking site. He just doesn’t know how to accurately measure his ROI on the site where 1,600-plus users "Like" his dealership. He also believes consumers are immune to online ads.

"I’m not necessarily opposed to it," he says. "It just seems like it’s going down the road of every other paid advertisement. Even though you can say paid ads on a website are effective, it’s never as effective as traffic that you’re generating in a much more natural manner."

For dealers pining over whether Facebook offers sufficient promotion, particularly after General Motors’ recent decision to pull its $10 million in advertising from the site, the answer could depend on to what degree the

While it is encouraging that 84 percent of vehicle shoppers use Facebook — as indicated in a recent study from Dealer.com, DriverSide and GfK Automotive Research — auto dealers strive to reel in that audience to land sales. And to Shum’s point about paid ads, a separate study from Greenlight, an international digital marketing firm, indicates that 44 percent of Facebook users say they never click on sponsored ads. But even that stat comes with a catch.

"For Greenlight and many other agencies and brands, advertising on Facebook has become part of the ‘usual mix,’" the report states. "For Greenlight specifically, we saw our Facebook investment (client media spend) overtake both Yahoo and Bing collectively at the start of 2011, hinting the channel had constant growth and was delivering a strong enough return to invest more."

Benstock and Shum, though, find that Facebook is geared more toward communication with clients rather than converting them into buyers. Shum points out that shoppers likely visit multiple websites before stepping foot in the dealership, making it tricky to gauge which site is responsible for each lead. For now, he relies on what his customers tell him.

"I’m OK that information is a little tough to come by," he says. "It doesn’t bother me that I can’t say I know that exactly 25 car sales this month are directly attributed to Facebook."

But Shum does notice that analytics are doing a better job of identifying the connection point. Benstock would welcome better metrics as well, but he thinks dealers make the mistake of viewing the Facebook phenomenon as an instant ROI product like other marketing mediums.

"It’s not like an ad in the newspaper that says: ‘We have this special this day; come and get it.’ It’s a communication tool that allows me to talk to my Facebook database for free," he says.

"For the dealer that goes on, tries a couple campaigns, then pulls out and says ‘Facebook is no good,’ I think they’re making a mistake."

That’s why Benstock shakes his head when he sees dealerships posting print ads on their Facebook pages. Another mistake dealers make, he adds, is focusing too much on how many fans their pages have. A better metric, he says, is interaction with users, which Facebook tracks.

"It’s not a numbers game in terms of fans," he explains. "We’ve found it’s the number of engagements you can have with clients."

The downside of opening this communication channel is consumers are more prone to post complaints. In fact, 41 percent of consumers polled in the Dealer.com study said they are likely to communicate a bad experience to vent or warn others. Another 40 percent, however, said they would recommend their choice dealership to friends via Facebook or Twitter. That’s why Benstock views Facebook as another way to track and even improve customer satisfaction.

"When a customer complains, we get back to them very quickly," he says. "And if you have one particular [employee] who’s had four or five complaints, you have to address that. That person has to change his or her approach."

Despite its kinks, the ROI with social media is becoming increasingly easier to determine, according to Dr. Natalie Petouhoff, social media professor and director at the University of California, Los Angeles. "To be successful in social, you need to determine why you’re doing it and what strategic objectives you’re trying to reach," she says.

Petouhoff teaches a six-step process for promoting on Facebook, which she says is designed to help businesses determine, track and achieve what they’re after. "Most companies jump to Step 5, which is setting up engagement interactions, or setting up and posting on Facebook and Twitter," Petouhoff notes. "But what makes a more comprehensive strategy is to spend the time prior to jumping on an engagement platform doing a couple of other things."

Those things, which make up Step 1 of her process, require that marketers invest in social monitoring tools to figure out what people are saying about their brand and their competitor’s brand. The second step is to develop a way to measure a campaign’s effectiveness, which many companies skip over, she says, because they simply don’t know how to do so.

Petouhoff, former chief strategist for public relations firm Weber Shandwick, has a formula for measuring ROI. It calls for marketers to subtract the realized benefits by the investment costs. That number is then divided by the investment cost and then multiplied by 100. Petouhoff says dealers shouldn’t confuse "benefits" for converted sales; rather, the term in her formula refers to the savings realized by communicating with customers for free on Facebook vs. traditional advertising methods. That’s why her last three steps focus heavily on the content marketers post, the engagement it delivers, and its ability to reach people outside of the dealer’s fan base.[PAGEBREAK]

Crafting the perfect post plays a major role in how engaged a dealership’s audience is. For Shum, the more information he can collect the more relevant and engaging his posts are. "It’s not just a conversation piece. It’s content; it’s volume," he says. "It all centers on what we do on a daily basis and what we’re trying to offer to the consumer."

That’s why Shum isn’t a big fan of the games he sees on other dealers’ Facebook pages. Sure, they have more "Likes," but he wonders if those games distract from the brand message he’s pushing. "Are they interested in Toyota or do they just like the game?" Shum asks.

The tactic Shum does subscribe to is posting photos of every new-car buyer on the dealership’s Facebook page. It’s about building loyalty, he says, a belief that’s backed by Dealer.com’s report, which shows that 72 percent of car buyers are "very likely" to recommend the brand they’re loyal to.

The report adds that communication in the social media arena is unique because it offers two-way marketing: Interested car buyers are looking to friends and other sources when it comes to selecting the right vehicle. The report reveals that 41 percent of those polled said a post on Facebook caused them to add a brand or model to their consideration, while 28 percent saw a post that caused them to consider a particular dealership.

Careful What You Say

Shum believes in the power of engagement, but he also knows the dangers of operating on this communication medium. A few years ago, 50 to 55 employees had access to the dealership’s social media account. Its Facebook page was active, but the messaging was inconsistent and the store’s reputation suffered as a result.

"Some employees had very opinionated views on politics or religion," Shum says. "We had employees who would quote scripture on a daily or weekly basis."

Today, five members of Toyota Sunnyvale’s management team work with DAS to keep the store’s Facebook page active and free of any religious or political agendas. Limiting access also helped eliminate concerns about disgruntled employees taking to the dealership’s page to air their grievances. "We are very, very protective of our culture and digital personality," Shum notes.

Proper upkeep of the dealership’s Facebook page also is important, not only for a sound reputation, but by law, says Ryan Stinneford, partner at Hudson Cook LLP. He stresses that all social media activity is subject to basic advertising regulations — including any post, Tweet or blog presented by a dealership. For that reason, he advises dealers to avoid allowing employees to post content without review.

Stinneford says one issue plaguing dealers is the liability associated with third-party content, and warns against paid or fictional testimonials. Stinneford explains that any dealer who compensates individuals for a testimonial must disclose that to readers, as stipulated within FTC guidelines. "Violating those rules would inherently fall under an unfair and deceptive act or practice," he warns. "[The FTC has] updated their guidance as they saw increased use of social media. It’s an area that they’re looking at and, if anything, over the past few years they’ve stepped it up and will continue to do so." 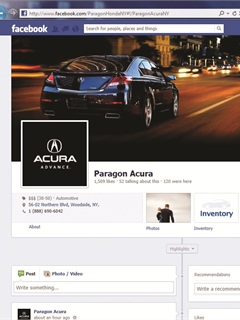 Benstock, whose dealer group also is finding success on sites like Twitter, Instagram and Pinterest, thanks the Great Recession for connecting dealers to Facebook. "I think the recession is the best thing to happen for many dealers, with no disrespect to those who unfortunately went out of business," he says. "It helped wake up the industry. It caused us to look at less expensive ways to communicate with our customers."

His confidence in social media’s future surpasses what many believe is possible today. Its strength, he believes, could overpower that of even e-mail. "Social media is a revolution and it’s not going away. But it’s still in its infancy despite it being around for a couple of years in dealerships," he says. "Right now, we’re simply building our database. And once we build this database, we’ll learn how to talk to it."

The big question regarding Facebook is whether it can outlast the slew of competitors emerging in the social media arena. Petouhoff said that’s one thing dealers don’t have to worry about.

"Facebook has the largest audience of all the social networking sites. At this point, there’s no competing site close to it," she says. "But to take advantage of it and gain true social CRM value, brands will need to invest in applications that drive business results. While there are some studies showing a correlation between brand affinity and ‘Likes,’ it’s time to go beyond the ‘Like.’"