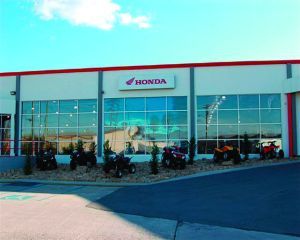 Garry Griffith bleeds powersports. His father owned a shop, and his grandfather was a Harley dealer in Cleveland back in 1926. And while this second-generation powersports professional still holds on to his mom-and-pop roots, his ability to stay on the cutting edge has kept the family business running smoothly.

Griffith’s father started his Chattanooga, Tenn.-based Griffith Cycle Shop in 1956, five years before Griffith was born. The business has since been sold, but the store carries on the family tradition with Griffith in the fold, albeit under a new moniker: Southern Honda Powersports.

“It’s a family thing,” explained Griffith, who serves as the dealership’s sales manager.

Much of Griffith’s skill as a salesman is rooted in his love for racing, which started at the age of 10. “I raced motocross on the SL70 in 1971,” he recalled. “I turned pro in 1975 and raced in the AMA nationals.”

Although an accident put an end to his motocross career, Griffith transferred his love for competition to the more glamorous world of road racing. In 1980, the first year he raced, he won the amateur national championship. Four years later, he won the WERA Grand National Finals. And even though his last road race was in 1989, Griffith’s achievements still serve him well today.

“During the ‘80s, my main profession was racing, but I was here (at the dealership) working when I wasn’t racing,” recalled Griffith. “People always came in to hear about my achievements, and the bikes I raced would sell better. As the saying goes, ‘What wins on Sunday sells on Monday.’”

Griffith’s sell-your-expertise-first approach is one of the reasons why the store employs salespeople with racing backgrounds. Not only does it help with customer relations, but having nationally recognized racers also helps pull in customers from all over the country.

“If I get a customer who wants to race dirt bikes, I’d rather they be able to relate to a salesperson who can give them that type of insight,” said Griffith. “I think when you have a background in racing, people believe what you tell them because you have that experience and come at it from every angle.” 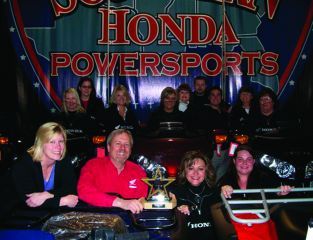 Employing ex-racers isn’t the only reason for the store’s success. “People want to come here just to see the place,” said Griffith of his 100,000-square-foot dealership, which maintains a stock of about 3,500 units. On the floor alone, the dealership showcases 800 vehicles equipped with various accessories.

“We don’t want to sell just a stock bike,” said Griffith. “We want to sell something on it, and most bikes don’t leave our dealership without accessories.”

Part of the dealership’s ability to upsell has to do with its sales process, which starts with the sales staff fielding phone orders for vehicles. While taking those orders, the sales staff will not only set up the customer for financing, but they will also upsell accessories. The goal is to have the vehicle and the deal completed before the customer arrives.

However, Griffith explained, “If the customer didn’t pre-buy accessories, we have a bike set up next to it with accessories. People come in and see the other bike and want it. It’s an easy upsell.”

Still, the hallmark of Southern Honda Powersports is its customer service. In fact, the dealership’s ability to connect with customers has them coming from as far as Atlanta to have their vehicles serviced at the dealership.

“When you sell so many vehicles, sometimes customers think they won’t get the type of customer service they expect,” said Griffith. “But we try to keep the service aspect here, because when we sell to a customer, we want them to come back to our dealership for service.”

The key is to maintain a fun, yet professional atmosphere, said Griffith, who does this by providing customers with refreshments and a comfortable lounge area. He also keeps things lively by announcing special deals on certain vehicles throughout the day to get customers excited.

“The amazing volume of sales at Southern Honda Powersports can be directly attributed to the fact that, from the time someone walks in the door, the process is all about the customer and their needs. They treat them like a valued family member,” said Rick McCormick, a dealership consultant with Reahard & Associates. “It’s a fun place to visit.”

And while Southern Honda Powersports has made its name on customer service, McCormick said it’s been Griffith’s ability to keep the dealership up with the times that’s made it a success.

“Being the second generation to head this company, he has done an excellent job of bringing the family values that made this dealership a household name in the area, and merging them with up-to-date techniques to grow the company and make it a nationwide leader in the field,” he said.

The one change Griffith does appreciate is the number of vehicle categories that have entered the market, particularly the advent of watercraft and all-terrain vehicles (ATV).

“In the old days, wintertime meant we had to lay people off because we were so slow,” said Griffith. “We are blessed to have two completely different products to sell at the same store. We get a few motorcycle people in the winter, but we sell mostly ATVs.”

“That made smaller bikes worth more money,” said Griffith, who said the shift was even more beneficial since most customers won’t negotiate on smaller vehicles. “They just bought them if they could find them,” he explained.

And since Southern Honda Powersports was one of the few dealers that had this coveted stock, customers came from all over the country to buy from them. “I have sold to every state, including Hawaii and Alaska,” said Griffith, who said even his competitors come to the store to buy. 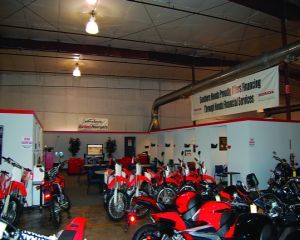 In addition to mastering the sales aspect of the powersports industry, Southern Honda Powersports also has a flourishing F&I department. “We’re ahead of the game compared to most mom-and-pop dealerships,” said Griffith.

Just having an F&I department at the dealership has helped with business, as Griffith estimated that 30 percent of his customers opt for dealership financing without a sales pitch. As for F&I product sales, F&I managers are encouraged to convert cash buyers to dealership financing if the additional cost of the products is the customer’s objection.

Griffith said the best part about starting most sales over the phone is the dealership already has a head start in educating consumers about F&I products. The key, he said, is getting customers preapproved for financing, which allows the dealership to tell customers up-front what they’re monthly payments will be.

But the real key to the department’s success, said Griffith, is its persistence in getting a deal bought, a characteristic that’s especially important in today’s tightened credit market.

“Honda likes us, so they will buy pretty deep for us,” explained Griffith. “But you have to be positive, even if the financing doesn’t work out. We don’t give up until the customer gives up.”

Although determination and great selling tactics are important, Dava Griffith, one of six F&I professionals employed at the dealership and wife to Garry, believes compliance is the most critical component of the dealership’s F&I operation.

“I’m AFIP (Association of Finance and Insurance Professionals) certified, and, by the end of the month, all of my F&I people will be certified as well,” said Mrs. Griffith, who last year took part in a three-month AFIP training course with her employees. “Anytime we get something new, we do extra training on product knowledge, too.”

As further evidence of Southern Honda Powersports’ dedication to compliance, the dealership was already compliant with the Federal Trade Commission’s Red Flags Rule by the original Nov. 1, 2008, deadline.

“We’ve got the policy written and had planned to have training on all the red flags at the end of October,” explained Mrs. Griffith. “So when they moved the compliance deadline back to May 1, 2009, we just postponed the training.”

And even though the Griffiths are proud of the store’s low turnover rate, the two said they won’t hesitate to let an employee go if they are “ethically challenged,” as Mrs. Griffith puts it.

As McCormick stated, “Garry and Dava Griffith completely disprove every day the myth that you can’t have excellent profitability and be totally compliant at the same time.

“The Griffiths have developed a business model that attracts customers from hundreds of miles away. I have seen firsthand their total commitment to 100 percent compliance in every facet of the business, and it is not a surface process. Instead, it’s borne out of a philosophy that the Griffith family has practiced for decades.”