Wholesale used-vehicle prices (on a mix-, mileage-, and seasonally adjusted basis) were essentially unchanged from May after the first 15 days of June. This kept the Manheim Used Vehicle Value Index at 222.7, which was up 11.1% from June 2021. The non-adjusted price change in the first half of June was a decrease of 0.3% compared to May, leaving the unadjusted average price up 12.4% year over year. 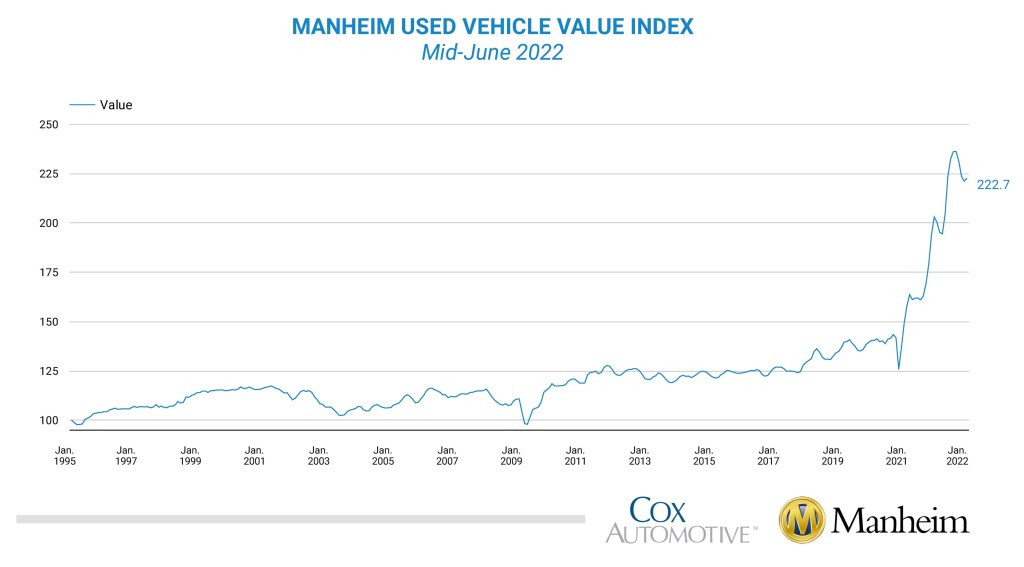 The last full two weeks covered the end of May, the Memorial Day holiday, and only the first 11 days of June, so the weekly trends were not as aligned with the half-month performance as is typically the case. Over the last two weeks, Manheim Market Report (MMR) prices saw accelerating declines. Over that time, the Three-Year-Old MMR Index, which represents the largest model-year cohort at auction, experienced a 0.6% cumulative increase. Over the first 15 days of June, MMR Retention, which is the average difference in price relative to current MMR, averaged 98.8%, which indicates that valuation models are slightly ahead of market prices. The average daily sales conversion rate of 53.1% in the first half of June declined relative to May’s daily average of 55.3% and has been lower than the typical conversion rate for this time of year. The latest trends in the key indicators suggest wholesale used-vehicle values should see declines in the second half of the month.

Most major market segments saw seasonally adjusted prices that were higher year over year in the first half of June. Pickups were the exception with a 1.2% decline year over year. Vans had the largest increase at 24.8%, and both non-luxury car segments outpaced the overall industry in seasonally adjusted year-over-year gains. Compared to May, most major segments saw lower performance, except for compact and full-size cars, up 0.5% and 19.9%, respectively. The seasonal adjustment drove the declines, with SUVs having no change from May, while midsize cars and pickups dropped 1.1%. 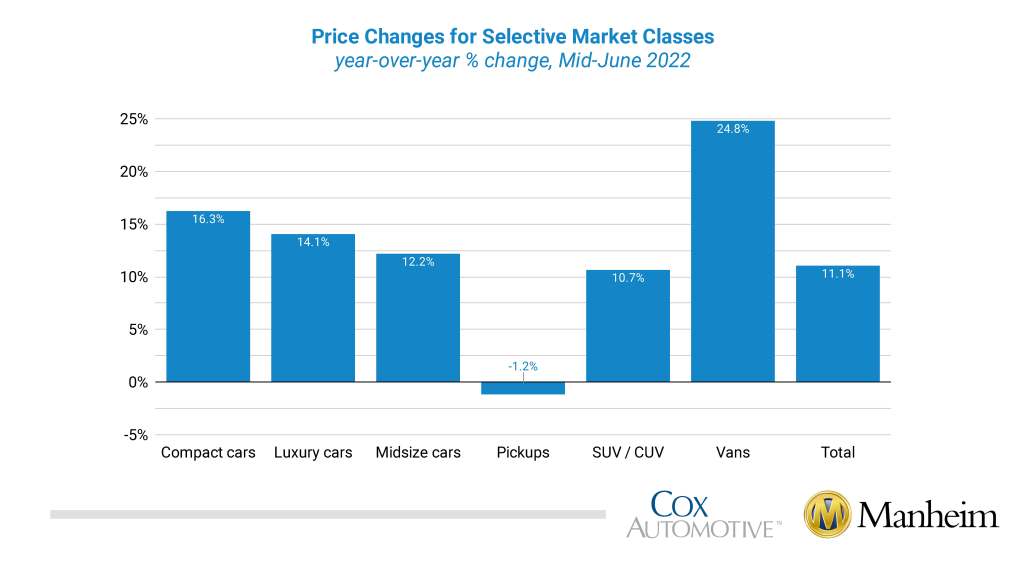 Consumer Sentiment declines to start June. The initial June reading on Consumer Sentiment from the University of Michigan declined 14% to 50.2, which was a record low for the index. Consumers’ views of both current conditions and future expectations declined substantially, and the expected inflation rate increased to the highest level since 2008. Consumers’ views of buying conditions for vehicles declined to the lowest reading in the history of the survey dating back to 1978. The daily index of consumer sentiment from Morning Consult also declined in the first half of June. As of June 15, the index was down 5.1% compared to May 31 and was at a new low for the index.