The automaker Factory Pre-Owned Collection portal is now live. The site, which will open up the automaker's remarketing channel to consumers, contains more than 30,000 used cars with less than 37,000 miles on the odometer. 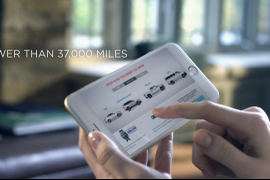 New-vehicle sales for 2015 totaled 17.5 million units, with the industry closing out the year with December sales of 1.6 million units, according to Autodata Corp.

GM Financial's transformation from subprime finance source to GM's captive finance company continued in the second quarter, with GM new-vehicle loans and leases accounting for 83.5% of total originations during the period.

General Motors told its dealers on Wednesday that it is cutting service visits on its free maintenance program and is rolling back coverage terms on its Chevrolet and GMC powertrain warranty.

General Motors has announced a strategic realignment that will establish Cadillac as a separate business unit. In addition, the new Cadillac organization will expand to New York with a new global headquarters opening in 2015.

In August, the estimated average transaction price for light vehicles in the United States was $32,495, according to the vehicle valuation source. New-car prices have also increased 2.7% from the same period last year.

June Sales Top A Year Ago Despite Fewer Selling Days

Total light vehicle sales in June rose 1.2% from a year ago to 1.42 million units, even with two fewer selling days on the calendar. The month’s 16.98 million SAAR also bested May’s and last June's rate.