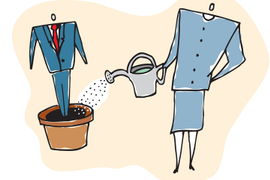 It’s not a ‘knowing’ problem that plagues dealerships; it’s a ‘doing’ problem. ‘Da Man’ explains why most training efforts fail before the trainer even leaves the store.

Getting Hot and Staying Hot

Sticking to your processes breeds success, and success breeds confidence. The magazine’s from-the-trenches columnist gets scientific to hunt down the key to keeping those hot streaks going.

Buying a car has always been an emotional experience, so why get mechanical? ‘Da Man’ digs deep to help you close more deals.

The Heartbeat of the Deal

Even the most talented sales teams need supervision. “Da Man” has a plan for keeping your process running like clockwork.

Momentum: Getting It and Keeping It

The magazine’s sales columnist delves deeper into his call for change in Part 2 of a two-part series on creating sales momentum at your dealership.

Too Cool for ‘School’

The magazine’s new columnist says the battle between ‘new school’ and ‘old school’ needs to stop. The reality, he says, is that both schools of thought are necessary in today’s retail environment.

The magazine’s sales columnist continues with his call for change in Part 1 of a two-part series on creating sales momentum at your store.

In September, the best sales and F&I trainers in the business will converge in Las Vegas for the magazine’s annual conference. Not being there is a gamble you can’t afford to take.

No Training, No Complaining

Can’t find good salespeople? Gen Y have you perplexed? The magazine’s sales columnist offers a few thoughts. Will you be willing to listen?

Employees can’t train themselves. But before you launch your store’s in-house training program, check out this primer on what it takes to get the most out of your sales team.

No one likes to be judged, especially by an outsider. But there’s at least one outsider to whom you might want to tune in.