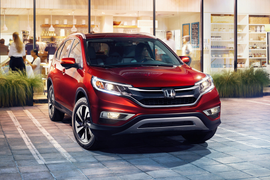 A sales mix in favor of utility vehicles drove up January’s average transaction price 3.3% from a year ago to $34,968. Among the greatest beneficiaries were the Detroit Three, with General Motors leading the way.

After a record December capped off a record year for new-vehicle sales, January appears to be enduring a hangover effect, the vehicle information site said. It expects sales to decline 3% from a year ago to 1.13 million units.

For the first time on Kelley Blue Book’s record, SUV sales should top car sales in the United States. The firm also expects new-vehicle sales to decline 6% in October due, in part, to two fewer selling days vs. a year ago.

Kelley Blue Book expects June new-vehicle sales to increase 5% from a year ago to 1.55 million units. This predicted increase should result in an estimated 17.1 million seasonally adjusted annual rate (SAAR).

Used-vehicle buyers are turning to sports cars in greater numbers thanks to low fuel prices, which are allowing them to forego fuel efficiency in favor of performance, KBB said this week.

Kelley Blue Book's new 'Get New Car Smart" marketing campaign is designed to reposition the brand away from being the used-car pricing and valuation destination to the go-to resource for new-car shoppers, company officials said.

Through the integration, users of GoMoto's Customer Experience platform will be able to offer Kelley Blue Book's appraisal tool as part of the initial customer registration process. Users will also be able to use the appraisal tool to get service customers to trade up and explore their inventory.

Generation Z may have grown up with more access to technology than Millennials, but buying online isn't what this emerging demographic prefers, according to a joint study from Autotrader and Kelley Blue Book.