Wholesale used-vehicle prices increased again in May, suggesting dealers have continued to achieve efficiency gains that allow them to bid-up auction prices even as gross margins narrow, according to Manheim’s Used Vehicle Value Index.

Wholesale prices fell for the third straight time in March, but Cox Automotive’s Tom Webb said the softening is no cause for alarm.

Manheim kicked off its month-long “Pump Up Your Volume” campaign on Monday, It's designed to promote inventory from key consignors as well as Manheim's large selection of sought-after luxury and non-luxury certified pre-owned vehicles.

Manheim revealed on Monday plans to segment its physical operating locations into two divisions: Local & Mobile and National. The firm also revealed the two vice presidents who will oversee the two divisions when the company’s new structure goes into effect on Jan. 1, 2016. 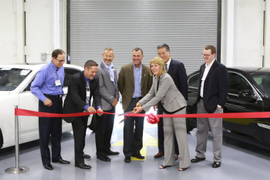 Manheim Louisville has rescheduled its Cruisin’ for Wishes car show and fundraiser for June 13, after the event was rained out on May 16.

The provider of vehicle remarketing services signs agreement to purchase an equity stake in the subprime finance source. The transaction is expected to close in June.