Dealer Steve Johnson knows a thing or two about operating a dealership in small towns. He got his start 46 years ago selling cars for a small-town Ford store. For the last 19 years, he has owned and operated Zumbrota Ford, located in a small (pop. 3,252) Minnesota town of the same name.

“Word gets around. And if people don’t know what you’re doing, they’ll make stuff up,” he says, proudly touting his store’s 97.4% CSI score and five consecutive DealerRater Dealer of the Year awards. “Small towns are unforgiving. Reputation is everything. In fact, we talk about that more than we do profitability. 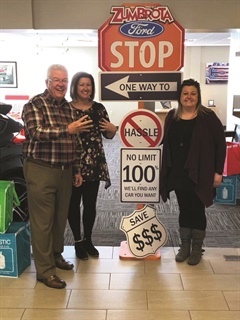 “I don’t care what we’re making on each deal,” he adds. “I want happy customers.”

On new-vehicle deals, Johnson’s three-person F&I team, which is led by F&I director Brian Willner, is averaging more than $1,500 per copy, with service contracts (40% penetration) and GAP (59%) leading the way. Johnson credits his four-year partnership with Automotive Development Group for his team’s success.

“Our process was fairly well-defined when we signed up with them. They learned what we do, and we learned from them,” Johnson says, adding that ADG spearheads the operation’s compliance training and monitoring, and also brought in a few new products. “They really helped us take it to another level in terms of production and customer satisfaction.”

On used, the F&I team averages around $800 per deal, which is high considering the dealership does 25 deals with Credit Acceptance per month and 50% to 60% of the customers who step through the dealership’s doors are credit-challenged.

“We have a reputation that we don’t talk down to our customers,” Johnson says, noting that 60% of the dealership’s business comes from referrals and repeat customers. “We’re counselors that provide solutions. We want them to be our customers for life.”

Nine years ago, Johnson’s operation partnered with Gravitational Marketing, an advertising agency that doubles as a peer group for dealers. The firm’s mission is to get companies to break norms and think differently. Johnson says dealers in different states will meet to discuss ways to improve their business. There’s also a code of conduct that, if followed, allows members to use the agency’s slogan: “Dealer for the People.”

“So it’s a really diverse group from all the countries, and we come together to talk about the principles of how we treat our customers and how we treat our employees,” Johnson says. “It just fit with the way we do things here.”

To that end, Johnson adds, Zumbrota Ford endeavors to back customers into the finance-appropriate vehicle, a process built around the store’s high percentage of subprime business. It begins with salespeople sitting with customers the moment they enter the dealership to find out what they’re trying to obtain, what’s kept them stuck in the vehicle they’re currently driving, and the amount of their desired down payment.

“It’s very humane,” Johnson says, adding that his team will abbreviate the process the moment the customer indicates they don’t need counseling. “The customer feels like they’re in control, that they have choices.”

Once the needs assessment is complete, the salesperson takes it to a sales or finance manager for direction. It’s one of the reasons Johnson’s finance managers often meet customers before the sales manager. But if the customer qualifies for a new vehicle, the finance manager will engage them immediately.

“We always have a pretty good idea of where we can go with a deal, because we are literally holding the customer’s hand through the process,” Johnson says. “Our goal is to always keep the customer occupied. … Someone, whether it’s a sales manager or finance manager, is always with them.” It may even be one of Johnson’s two daughters, Kristin or Kelly, also known as “The Sisters of Savings.”

Kelly, whom Johnson refers to as “the Swiss Army knife,” joined the dealership four years ago after a successful career in marketing and promotions. Johnson says she immediately moved into the finance office and now manages the organization’s in-house leasing company. Kristin left another Minnesota dealership to join the family business seven years ago. She can be found most days working at the desk.

“They have their finger on the pulse and know how I want it to go,” Johnson says.

Operating in a small town also means plenty of opportunities to give back. The short list includes youth organizations such as the National FFA Organization, the Goodhue County 4H Club, and the Jeremiah Project, as well as the Ability Building Center for people with special needs, the Salvation Army, and many more.

“We give back and are active in our community. I was a member of the Rotary Club for 25 years before it disbanded. We also have a Lions Club, which my daughters are members of, and we’re active on the school board committee to help raise money for a new school,” Johnson says. “So there’s a lot of opportunity and a shortage of people to commit their time.”