The changing market dynamics experienced by automotive finance sources last year continued to pose significant challenges for the automotive finance market in the first quarter 2009, with the high-risk consumer segment and delinquencies continuing to grow.

What’s clear is risk mitigation is the name of the game in what remains an unpredictable automotive lending market, with most traditional lenders moving away from the high-risk credit category. That spells further problems for dealers attempting to get credit-challenged consumers financed.

The first quarter also saw an increase in the number of car buyers being pushed out of new-car loans and into the used-vehicle market, another sign of the struggling economy’s influence on lender guidelines.

Looking at the market by lending tier provides a clear picture of the shifts in credit quality among all open automotive loans held by consumers across the country. And during the first quarter, the trend of consumers shifting into lower credit tiers continued. For instance, while more than 58 percent of consumers with automotive loans were considered prime, the category decreased by 2.6 percent from the first quarter 2008. 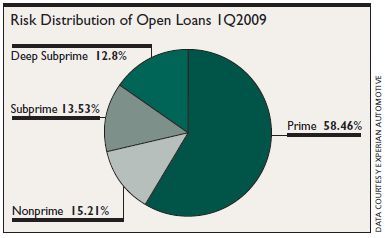 Experiencing the greatest growth in the first quarter was the deep subprime population, which increased 6.03 percent from the prior year. This resulted in 12.8 percent of consumers falling into this high-risk category. Also increasing were the nonprime and subprime segments, which saw increases of 3.08 percent and 1.87 percent, respectively.

Loans 60 Days Past Due

Increases in delinquency are one of the leading causes of consumer credit shifts, and is one of the most significant data points on which lenders focus. As lenders experience increasing losses due to delinquency, the availability and details of lender programs may change, impacting the credit programs available to dealers.

As seen over the last several quarters, the trend of increasing delinquency continued in the first quarter 2009. Loans 60 days delinquent reached 0.82 percent during the measurement period, an increase of 19.5 percent from the prior year. Not only did the rate of 60-day delinquency increase, but the outstanding dollar balance increased by more than 21 percent, resulting in more than $5.7 billion in loans reported 60 days delinquent. 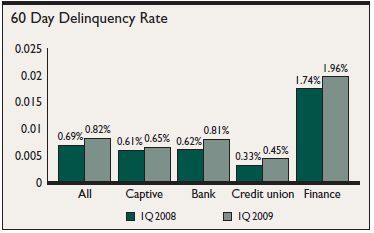 Banks accounted for nearly 37 percent of all open automotive loans and had the second highest rate of 60-day delinquency at 0.81 percent, an increase of 31.7 percent from the prior year. Due to their high market penetration and rising delinquency rates, banks had the greatest at-risk loan balance with more than $2 billion in automotive loans reported 60 days delinquent. 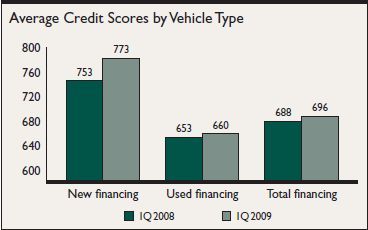 Higher risk consumers, while still finding financing in the automotive space, had greater penetration in the used-vehicle market. But while more than 53 percent of used-vehicle financing was found outside of the prime market, the higher risk segments did contract from the prior year. In fact, the most significant reduction in the used-vehicle finance market was the subprime segment, which shrunk 17.05 percent from the previous year (new financing saw a 35.66 percent reduction). 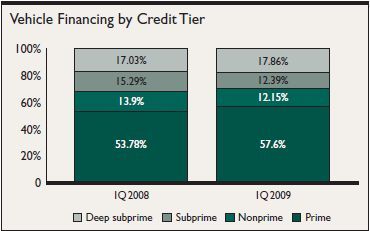 The highest risk segment, deep subprime, represented 20 percent of used-vehicle financing and only 1.56 percent of new-vehicle financing. The most significant reduction was seen in new financing, with more than 48.7 percent fewer loans being financed. Used financing, however, experienced an increase of 3.2 percent in this high-risk category. 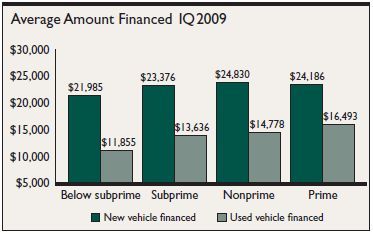 Across the risk tiers, new-vehicle financing varied little as credit changed. The highest amount financed on new vehicles was seen in the nonprime population, which averaged $24,830, a decrease of $858 from the prior year.

As credit scores changed, used-vehicle financing experienced greater deviations. Prime consumers financed approximately $4,638 more than below subprime consumers in the used market. However, the used market experienced the greatest decreases in the amount financed. The largest of these decreases was seen in the subprime segment, which fell by $2,079. This resulted in consumers within this segment financing on average $13,636.

Across all risk tiers, the average loan term for the first quarter was 59 months. While terms vary considerably by credit tiers, each risk group saw considerable decreases in monthly terms — with used-vehicle financing experiencing the greatest reductions.

The average term for new-vehicle financing across all risk tiers was 62 months, with the longest terms held by the higher risk loans. However, despite having longer terms, these segments experienced the greatest term contraction for new financing. Below subprime saw a reduction of 1.42 months, resulting in an average term of 67.46 months. Subprime new loans fell by 1.15 months, bringing the average term to 68.17 months. Nonprime and prime loans also experienced reductions of 0.82 and one month, respectively. 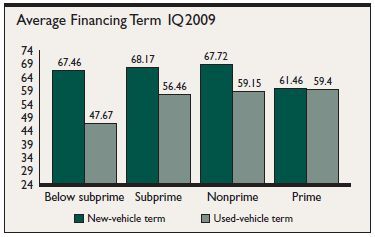 Used financing for prime consumers, while holding the longest used term (59.4 months), also saw a decrease of 1.63 months over the prior year.

Vehicle financing continues to experience noticeable and notable shifts in the market. While auto loans were originated across all risk tiers, considerable changes were made to financing based on vehicle type. Additionally, lenders continue to tighten their financing criteria as delinquencies increase. If the shifts outlined in this analysis reveal anything, it’s that the changes in lending trends are unprecedented and a bit unpredictable.

The used-vehicle market is a good example of this volatility, as it appears to have been impacted more dramatically by loan characteristics. In contrast, new-vehicle financing constricted considerably, as seen with the shifts in lending to higher credit scores.

These continued changes in the market will present ongoing challenges for the F&I manager, as lenders continue to evolve their finance programs based on market conditions. Having a firm understanding of these changes will be an F&I manager’s best chance at knowing how lenders are reacting to the market and where they need to shift strategies to best work with lenders in their market.

Melinda Zabritski serves as the director of automotive credit for Experian Automotive. She can be reached at [email protected].