Some industry experts put the blame on technology. Others lay the blame on the reliance of scoring systems by lenders. Regardless of where the blame should be placed, it’s clear the “art of hanging paper” is a lost art.

It was just a few short years ago that lending institutions had representatives visiting our dealerships on a regular basis, competing and sometimes begging for our business. Now, under the weight of the current economic climate, lenders are trimming staff and placing a much greater emphasis on collections and managing defaults.

Even worse, some lenders have eliminated those monthly visits altogether in favor of monthly phone calls. Some well-known institutions have even gotten out of the business entirely.

Dealers are also now being conditioned to take the first offer from the bank, without any rehash or ability to get the deal done. Banks are getting indignant about the bureau scores appearing on the customer applications we submit. In addition, the credit crunch has given the lending institutions the strength to pull back, which is something they’ve tried unsuccessfully to do in the past. This is where the artistry of hanging paper is missed.

An Industry Without Credit Scores

Several years ago, before bureau scores were published, F&I managers had to learn how to read a bureau. Doing so would lead into the customer interview, a crucial step before the advent of menu selling. The goal of the interview was for the F&I manager to get a good understanding of the customer’s credit, character, capacity and collateral, sometimes referred to as the four Cs of credit.

F&I managers then created a plan on how to sell the paper to the bank. Remember, most bankers or credit analysts did not consider themselves as being in the car business. Like today, banks didn’t always agree with the deals we presented. The only difference back then was there weren’t scoring systems for them to rely on.

Most lenders had their own proprietary scoring system, which very few people understood, including the lenders’ own credit analysts. It was not uncommon to have an analyst declare that he or she couldn’t figure out why a deal was scored the way it was, or state that the bank must have secretly changed the algorithms the night before. In either case, it was up to the F&I manager to start doing his or her job.

When beacon, FICO or bureau scores were introduced, lenders turned to them to guide their decisions. Those arbitrary numbers were supposed to make life easier for both the banks and the dealers, as they were supposed to provide guidance on what deal should be bought and at what price.

Bureau scores also made it easier to train F&I managers. Spot delivery decisions were simpler. The F&I staff was no longer expected to know how to fully interpret a credit bureau. Instead, the F&I manager could look at a bureau score, compare it to the bank’s rate sheet and the decision was made. Sales managers and salespeople all became qualified to read a credit bureau, or at least read a bureau score.

What many people forget is the FICO scoring system was initially designed to be a predictor of bankruptcy. So, someone with a very limited credit file might have a good score, but someone with good credit could have a score that was not representative of his or her actual credit. Again, this is where a seasoned F&I guru, the paper hanger extraordinaire, succeeded.

Most successful F&I managers made names for themselves by securing credit approvals for credit-challenged customers. These were the paper hangers that made the big money. Unfortunately, they are also a dying breed.

Don’t misinterpret this. There are still very talented F&I managers working at dealerships, but the artistry seems to be gone. When managers did their jobs well, the customers were most appreciative. They told their friends what a great job the dealership did for them, and, most importantly, the majority of the time these F&I managers produced higher than average back-end profits. 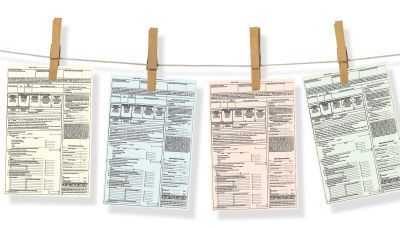 Return of the Paper Hangers

What the industry needs now is for those characteristics that defined yesterday’s F&I professional to return. It’s simply becoming too difficult to get banks to listen, which makes it virtually impossible to get those customers with shaky credit financed.

If the industry hopes to make it through these uncharted times, it must get back to the basics. Bureau scores should only be utilized as a point of reference, and customer interviews must become a top priority again. Because in this day and age, those interviews will provide F&I managers the tools needed to hang paper.

New recruits and F&I trainers need to focus more on paper hanging. F&I managers should be video taped to hone in on their paper-hanging skills. In other words, video-recording training should no longer be reserved for F&I product sales.

No one doubts the efficiencies technology has brought to our industry. Unfortunately, it has done so while sacrificing some of the skills that made for a professional F&I manager. Let’s stop the trend and avoid the extinction of our industry’s most precious resource — the professional F&I manager. After all, more paper hung means more vehicles delivered. And more vehicles delivered means more service department work, more profits and happier customers and employees.

Randy Hoffman is an F&I professional for a major dealer group in the
United States. He can be reached at [email protected].