Unemployment is up. Customers are saving more and spending less. When they do buy, they’re  looking to squeeze as much value and as many miles out of the vehicle as they can. In September, industry experts gathered in Las Vegas at the 2010 F&I Conference and Expo to hammer out a profile of the post-recession customer. Their conclusion? The role of the F&I manager could soon be expanded.

The start of this year’s conference marked the two-year anniversary of the collapse of Lehman Brothers, Fannie Mae and Freddie Mac. The bankruptcy filings of the three companies sent the economy into a credit-induced tailspin that would put more than 3,000 dealers out of business in an 18-month span.

Up until September 2008, anything below 13 million units sold in a year was considered a depressed year. Today, the industry is struggling to return to the 12 million-unit mark as it struggles to find what Stephen Wade, incoming chairman for the National Automobile Dealers Association, called “the new normal.”

“You have heard the new phrase many have coined, ‘the new normal.’ Some of us are still trying to determine what that is,” said Wade, president of Wade Auto Center in St. George, Utah. “The good news is that sales in 2010 are on track to grow by double digits. But because consumers continue to be nervous, I personally am concerned that a full rebound in retail demand is still on the short horizon.”

Dealers have spent the last two years testing strategies — from Internet sales and social media to no-haggle pricing — for attracting skittish customers in a year that’s expected to end in the 11.7 million-unit range. Despite the call for change in the way dealers conduct business, there was a familiar call to arms among retail experts. 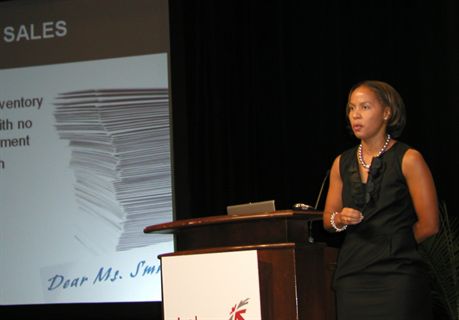 “Get the F&I department involved in the deal early so you can save face for the customer, because they want to make sure they don’t get in a situation where they have to walk out of the dealership without the vehicle,” said Heather Haynes, a sales training manager for JM&A Group. “It should happen in the showroom after they’ve landed on a vehicle. If it’s over the phone, put the F&I manager on the phone with the customer. On the Internet, the online credit application should go directly to the F&I manager, who should pick up the phone and call the customer.”

This cradle-to-the-grave F&I strategy experts touted during panel discussions and workshops is critical, they said, for customers navigating today’s lackluster economy. The U.S. Department of Labor put the unemployment rate at 9.6 percent in September, and forecasts say the situation is not likely to improve until well into next year.

There are some positive signs, however. Melinda Zabritski, Experian Automotive’s credit analyst and a panelist at this year’s conference, has seen some improvements in the auto finance segment over the last two quarters. For instance, the total dollar balance associated with delinquent loans decreased by 24.2 percent in the second quarter of 2010. More importantly, second-quarter data indicated that finance sources are once again testing the below-prime waters.

“What’s clear is the market remains open to the low-risk credit customers, which means dealers will need to continue studying lenders in their local markets and learn which ones can fill the lending gap for their high-risk tiers,” said Zabritski. “Still, there appears to be a glimmer of light at the end of this economic tunnel.”

One strategy addressed during an executive panel was the one-price F&I strategy being tested by Sonic Automotive. The Charlotte, N.C.-based auto group hopes the move will increase the number of products sold per deal. The idea also brings transparency to a department that has often been a mystery to car buyers. Dave Duncan, an executive with Safe-Guard, questioned the marketability of such a policy.

“The biggest challenge is to try and create a marketing advantage [out of this strategy],” Duncan said. “Many customers don’t know we’re making money in the F&I office.”

Pete Biscardi, president of National Auto Care, said such a policy also could dissuade customers who are accustomed to negotiating. “If price is the only determining factor, we’re done,” he said. “I also think customers want to haggle, because that’s what we’ve done since day one.”

The panelists all agreed that customers are buying out of need, not want, a belief backed by a recent survey conducted by Chrome Systems. Twenty-six percent of respondents said they purchased or leased a vehicle because their current vehicle broke down or was unreliable, up from 19 percent last year. In fact, price was the factor respondents said they paid attention to most.

“Today’s consumer is more mindful of a need versus a want. They are rethinking and redefining value to better fit their world,” said Rick Kurtz, an executive with Protective’s Asset Protection Division. “They are doing more research, and they’re not as impulsive.”

Philip Shaw said the recession never did hit his Kentucky dealership, but the F&I manager said many of the buying traits of the post-recession customer did. “They’re looking to get a little bit more truck for their money,” he said. “The one big difference between a couple years ago to now is they’re spending less cash. They’re not buying the $30,000 truck now; they’re buying the $20,000 or $15,000 truck.”

Speeding Up the Pace

The Internet and its impact on consumer buying behaviors also were addressed. In the Chrome survey, 83 percent of respondents were likely to shop for a vehicle online before making a purchasing decision. “More dealers are seeing ‘ups’ coming via the Internet instead of the showroom,” JM&A’s Haynes said. “This will only grow.”

How that changes things for F&I managers is unclear, but experts believe dealers and their F&I offices aren’t taking advantage of one significant opportunity the Internet presents. “Unfortunately, much of the F&I product information found on Websites is often incomplete or inaccurate,” said Protective’s Kurtz. He added that dealers not only need to get F&I product information up on their Websites, but give it top billing on their home pages. He did warn, however, that the Internet can’t be counted on to sell the products.

“A dealer Website is a great opportunity to expose consumers to F&I products, but a poor surrogate for a consumer presentation,” Kurtz said.

Haynes also touched on the role of social media in today’s front-end departments: “We just need to deal with social media, regardless of whether we’re talking about the post- or pre-recession customer,” she said. “It’s designed for awareness or recognition. It’s the billboard of the 21st century.”

John Luckett, a Warranty Group executive, understands the impact the Internet is having on transaction times. However, he warned that, with new regulations on the horizon — specifically, the Risked-Based Pricing Rules, which go into effect Jan. 1, 2011 — dealers will need to slow customers down. The new rule will require dealers to disclose why consumers with blemishes on their credit report received terms less favorable than those granted to other customers.

“We need to have those dialogues. We are spending a lot of time on sales and the same needs to be done in F&I,” said Luckett. “Don’t try to ram the customer through the process too fast.”

Gerry Gould, director of training at UDS, took it one step further. “If the F&I manager isn’t with the customer, he or she should be with sales, structuring deals,” he said. “Communication and collaboration has to happen.”

The thought is that if F&I managers take the time to talk with customers, learn their financial history, put them in the right vehicle and structure deals with proper down payments, customers will feel less anxious and have the right expectations about buying a vehicle. The same is true with lenders, panelists said.

“The F&I department has to have a strong, ethical relationship with its lenders,” Haynes said. “It has to present clean deals to the lender. If it doesn’t, then it sends the wrong message to lenders — that you don’t care.”

The current environment raised another question: Is it time for the F&I manager’s role to evolve? With used-vehicle sales keeping many dealerships afloat last year, this evolution is already happening at some stores.

“There should be more communication between the used-car buyer and the F&I manager,” Haynes said. “What vehicles are easier to finance? What cars are lenders going to buy?”

Kevin Westfall, a senior executive with AutoNation, talked about some of the structural changes taking place at his dealer group. The group is currently testing the feasibility of having directors and managers that would oversee F&I and sales functions.

That would put one manager in charge of sales associates, a strategy employed by Carmax. With profit margins remaining virtually unchanged for more than three decades, Westfall said dealers must balance rising operational expenses with the need to attract top talent. He believes the one-manager solution also could result in a better experience for customers.

“The world of F&I will change. We don’t have it figured out, but we’re working on it,” he said. “The average dealership, do they even look at it? Typically not, because the F&I department, I’m telling you, they don’t want to touch it. That is the golden goose. So the challenge will be to get dealers to really think and react and do something different.”