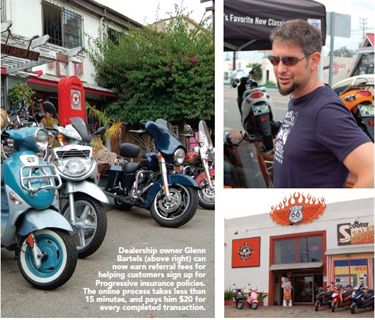 Standing just outside the entrance of Route 66 Modern Classics is a cardboard cutout of Flo, the red-lipped spokeswoman for Progressive Insurance Company, sitting atop a bright orange scooter. Not only does the life-size, point-of-purchase piece represent a new service offering for the Marina Del Rey, Calif.-based scooter retailer, it represents a new offering for the powersports industry.

The cardboard sign is part of an advertising campaign promoting the partnership between the Chicago-based Genuine Scooter Company and Progressive. Through the joint venture, customers can get an insurance quote for their scooter at the dealership without interrupting the flow of the sales process.

The collaboration between the companies is exactly what Glenn Alan Bartels, the owner of Route 66 Modern Classics — which also rents scooter and motorcycles — needed for what he expects will be a busy summer for scooter sales. Not only will the partnership add to his bottom line, it will also provide peace of mind each time he watches a customer ride off on a new scooter.

“There are very few insurance companies providing insurance for scooters,” he said. “And I’ve been adamant about my customers having insurance before they leave the store after an incident involving one of my customers.”

As the story goes, the customer rode the new scooter off the lot without insurance. The accident occurred while she was on her way home. Technically, she had up to 30 days to contact her insurance company about the new vehicle, but her company refused to accept the claim after her accident. The customer ended up with a suspended license and a damaged scooter, which she paid out of pocket to repair.

The occurrence is the main reason why Bartels makes every cash or finance customer aware of the risks of not having insurance before leaving his store. And since his dealership is in California , where insurance is mandatory for all riders of two-wheeled vehicles, asking customers about insurance is part of the sales process.

Bartels’ requirement also played into a major need at his store. With his business competing with several other motorcycle and powersports dealers that line the major thoroughfare his store is located on, Bartels knew he needed another offering to sell.

“We contend with the Harley store next door, so we needed more to sell,” said Bartels, referring to the chance to sign up customers with Progressive, which earns him a $20 flat fee with each referral.

The arrangement between Progressive and Genuine Scooter couldn’t have come at a better time, as Bartels expects a repeat of last summer’s record sales for scooters. Two weeks into the campaign, which began in late June, Bartels has already signed up a couple of customers to policies.

Phillip McCaleb, the president of Genuine Scooter, said his company’s relationship with Progressive not only provides a nice promotion for his scooters, but it also fulfills the needs of his dealers.

“It removes a historical speed bump from the sales process, because the dealer doesn’t have to wait for the customer to call his Uncle Joe to see if they’ll write a policy,” he noted.

McCaleb hatched the idea to partner with Progressive four months ago. He wanted to help customers overcome the hesitation of purchasing a scooter because they didn’t have insurance.

From a marketing standpoint, McCaleb thought that Progressive’s spokeswoman Flo and Genuine Scooter’s best-selling Buddy model were a good fit. “The marriage of ‘America ’s Smallest Scooter Company’ and the bubbly retro girl from Progressive just works,” he said.

What resulted from McCaleb’s pitch to Progressive is a two-year multimedia campaign targeting dealerships and consumers. All 220 Genuine dealerships have the cardboard cut-outs of Flo and information pamphlets to distribute. Customers can get insurance quotes while at the dealership by calling a toll-free number or by visiting the dedicated Progressive Website, www.progressive.com/genuine.

In addition, the insurance quotes aren’t limited to Genuine products. “My dealers can facilitate policies on every brand they sell. I’ve got Harley dealers who, because they’re Genuine dealers, can facilitate insurance on the spot for their customers,” McCaleb said.

He also said dealers are missing out financially if they don’t take advantage of the partnership with Progressive, as the offering can earn an average of $150 to $170 per year from completed transactions. The fees are reimbursed to dealers through a third-party agency, he added. “What we’re telling them is if they’re not offering this feature to every customer that walks through the door, they’re missing sound F&I money,” he said. “I think a lot of smaller dealers who specialize in scooters get instant credibility for their shop.”

How well the campaign works won’t be known until after Labor Day, as McCaleb wants to allow dealers to capture the two strongest months for scooter sales — July and August. But for Route 66’s Bartels, the campaign is already paying off.

“Phillip is not only a super enthusiast, but he is also all about support for his dealers,” said Bartels. “Rarely do you find a manufacturer that cares about its dealers.”