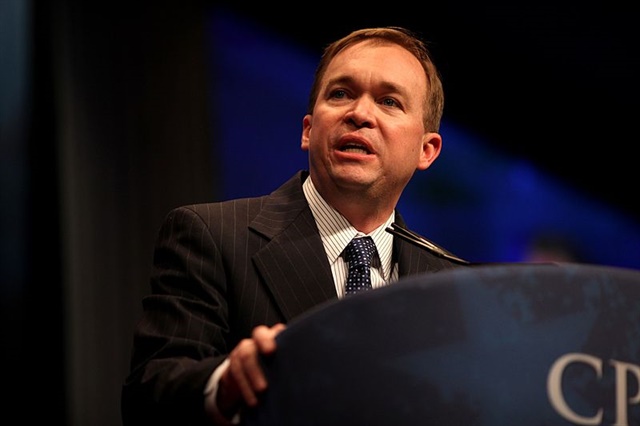 UPDATED 11/28/17: The article was updated to include details on yesterday's emergency hearing before U.S. District Judge Timothy J. Kelly.

Mulvaney, who once called the bureau a “joke,” responded with his own email to staffers. “Please disregard any instructions you receive from Ms. English in her presumed capacity as Acting Director,” read Mulvaney email, which was posted online by CNBC. “If you receive additional communications from her today in any form, related in any way to the function of her actual or presumed official duties, please inform the General Counsel.

“I apologize for this being the very first thing you hear from me. However, under the circumstances, I suppose it is necessary,” he continued. “I look forward to working with all of you. If you’re at 1700 G Street today, please stop by the 4th floor to say hello and grab a donut.”

This was the scene on Monday when CFPB staffers returned to work after the Thanksgiving holiday break, one that saw the battle for control of the bureau intensify when English filed suit the day before to block Mulvaney’s appointment. She cited a statute contained in the Dodd-Frank Act that says the CFPB’s deputy director shall “serve as acting director in the absence or unavailability of the director,” or until Trump selects a permanent successor to Cordray and that nominee is confirmed by the Senate.

“The president apparently believes that he has authority to appoint Mr. Mulvaney under the Federal Vacancies Reform Act (FVRA) of 1988. But the Vacancies Act, by its own terms, does not apply where another statute ‘expressly … designates an officer or employee to perform the functions and duties of a specified office temporarily in an acting capacity,’ which is exactly what the Dodd-Frank Act does,” reads English’s suit, filed late Sunday in the U.S. District Court for the District of Columbia. “An earlier version of the Dodd-Franck Act, which would have specifically allowed the president to use the Vacancies Act to temporarily fill the office, was eliminated and replaced with current language designating the deputy director as the acting director. And the president’s attempt to appoint a still-serving White House staffer to displace the acting head of an independent agency is contrary to the overall statutory design and independence of the bureau.”

English is seeking a declaratory judgment and a temporary restraining order to prevent Mulvaney’s appointment, which Trump made hours after Cordray formally resigned on Friday, Nov. 24, and elevated English, his former chief of staff, to deputy director of the agency. The question of whether the Dodd-Frank’s succession statute displaces the president’s authority under the Vacancies Reform Act will now be decided by a federal court.

According to The Washington Post, U.S. District Judge Timothy J. Kelly heard arguments during an emergency hearing Monday afternoon but declined to rule immediately. Kelly said he would wait until government attorneys supplemented their arguments in a 40-minute hearing by filing a formal, written response Monday night defending Mulvaney's appointment.

However, the U.S. Department of Justice and the CFPB’s general counsel offered their opinions on Trump's appointment under the FVRA in two separate memos issued on Saturday, Nov. 25.

In its eight-page memo signed by Assistant Attorney General Steven Engel, the U.S Department of Justice sided with the Trump administration. “Congress has characterized the CFPB as ‘independent,’ and has purported to make the director removable only ‘for inefficiency, neglect of duty, or malfeasance in office,’” the memo reads, in part. “Both those indications of independence do not prevent the president from using the Vacancies Reform Act, because Congress specified that the CFPB ‘shall be considered an executive agency,’ which brings it within section 3347(a), and because the CFPB’s director does not fall within the category of officers whom Congress has excluded from coverage under the Vacancies Reform Act.”

Mary McLeod, the CFPB’s general counsel, agreed in her own three-page memo. She addressed English’s assertion that the Dodd-Frank Act’s succession statute is clear when it says the deputy director shall serve as acting director “in the absence or unavailability of the director.” She also referenced a March 2016 ruling by the U.S. Court of Appeals for the Ninth Circuit in Hooks v. Kitsap Tenant Support. In that case, the appeals court agreed with the Obama Administration’s argument that a presidential designation under the Vacancies Reform Act supersedes the succession statute of an independent agency.

“In the present circumstances, it is not necessary to resolve the meaning of “absence or unavailability” because the statutory language, legislative history, precedent from the Office of Legal Counsel at the Department of Justice, and case law all point to the conclusion that the president may use the Vacancies Reform Act to designate an acting official, even when there is a succession statute under which another official may serve as acting,” she wrote, in part.

“Accordingly, as general counsel of the bureau, it is my legal opinion that the president possesses the authority to designate an acting director for the bureau under FVRA,” she added. “I advise all bureau personnel to act consistently with the understanding that Director Mulvaney is the acting director of the CFPB.”

The CFPB’s activities, however, will be stuck in limbo as the court hears English’s complaint. Citing sources familiar with the bureau’s plans, Reuters reported that the bureau was preparing to sue Santander this week for overcharging auto loan borrowers for GAP. It is not clear if the CFPB, whose rule banning mandatory pre-dispute arbitration was killed last month by the Republican-controlled Congress, will file its lawsuit.

“The administration is aware of the suit filed this evening by Deputy Director English. However, the law is clear: Director Mulvaney is the acting director of the CFPB,” said White House Press Secretary Sarah Sanders during a press briefing this morning. “Now that the CFPB’s own general counsel — who was hired under Richard Cordray — has notified the bureau’s leadership that she agrees with the administration’s and the DOJ’s reading of the law, there should be no question that Director Mulvaney is the acting director. It is unfortunate that Mr. Cordray decided to put his political ambition above the interests of consumers with this stunt.”