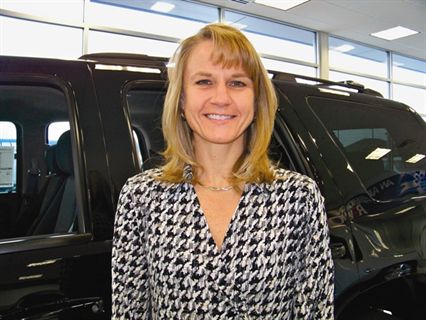 Compliance might create industries, but it’s also responsible for what is and what will continue to be a critical post inside the dealership: the compliance manager. Such is the case with Karina Grile, who has held that title for much of her 19-year career with the nine-store, Dayton, Ohio-based Voss Auto Network.

Grile assumed her post 15 years ago, shortly after her organization hired a new CFO. He made it abundantly clear that, under his watch, deals would be turned away if they weren’t done right. It was Grile who stepped in to figure out what “right” was, and she continues in that role to this day.

“I guess I kind of fell into this,” says Grile, who was serving as the assistant to the finance director when she assumed her current position. “I guess if it wasn’t for the CFO and my dealer, I wouldn’t have a job.”

Grile has since grown into her position. She leads the dealership’s new-hire training, stays in constant contact with her state dealer association for any regulatory updates and tackles any issues or questions that come up about her compliance procedures. In fact, she’s fielding questions daily from her F&I managers about the dealership’s Red Flags Rule (RFR) procedures, which she established shortly before the Federal Trade Commission (FTC) delayed its enforcement of the rule for the fifth time back in May 2009. The enforcement moratorium was expected to be lifted on Dec. 31.

“I get [Red Flags Rule] calls daily with questions like, ‘This is what I have, what should I do?’ That’s when we start looking at DealerTrack,” she says. “The process itself takes maybe five minutes, but it was yet another step in all the paperwork we have to do.”

The group’s RFR protocol has yet to nab any would-be ID thieves, but Grile says she’s had to turn away one or two deals because customers couldn’t provide the required verification. Because of the way the RFR played out, the compliance manager admits to taking a wait-and-see approach to the new Risk-Based Pricing Rule (RBPR), which was expected to take effect on Jan. 1. In December, she found herself racing to get her group’s procedures in place, signing up for whatever Webinar she could find for guidance. “It’s definitely been a thought this entire year, but I knew it would snowball toward the end of the year,” she says, adding that she’ll once again turn to DealerTrack for a solution.

Lining Up for Battle

Grile says she was a little nervous when she first caught wind of the new rule through the Ohio Automobile Dealers Association (OADA), but was relieved when she found out about the dealer exception. The rule — mandated by the Fair and Accurate Credit Transaction Act of 2003 — requires creditors, including dealers, to provide a specific notice to applicants who, based on their credit report, receive credit terms less favorable than those granted to other consumers. Not factoring in penalties at the state level, noncompliance with the rule can lead to fines of up to $16,000 per violation.

If not for the work of the National Automobile Dealers Association (NADA) in securing an exception, dealers would have been forced to evaluate the rate their finance sources offer on a deal-by-deal basis. That work would include determining the impact of their markup on that rate, then executing a disclosure based on those findings. With the exemption, dealers are merely obligated to hand every customer who applies for financing a credit score disclosure notice, which, among other things, must contain a written description or graphic representation of how the applicant’s credit standing ranks against other consumers in the same scoring pool.

Manas Mohapatra, who serves in the FTC’s Division of Privacy and Identity Protection, says dealers can thank the advent of risk-based pricing — a practice where lenders set or adjust the price and other terms of credit provided to a customer based on his or her credit worthiness — for the rule.

“With the adverse action requirement, people are told information in their credit report probably caused their denial of credit,” Mohapatra says, “However, what had been occurring was that people were not being denied credit, but were getting much worse material terms and weren’t being informed of that fact. This rule is supposed to fill that gap.”

Although the rule is intended to help consumers make an informed credit decision, it’s also intended to help them spot errors in their credit report. That’s why the rule is very specific about when the notices must be issued, requiring that the notice be handed to consumers as soon as “reasonably practical” after the dealership pulls the credit report and before consummation of the deal.

“This is a consumer education rule, so the idea is to try and get that information to the consumer at a meaningful time,” Mohapatra adds.[PAGEBREAK]

Back in the Trenches

Grile isn’t so sure reality will match the FTC’s expectations. She says it’s clear consumers are more aware of their credit standing these days, estimating that about 75 percent of her customers know exactly where they stand. However, she doubts the notices will result in consumers shopping for better credit terms.

“Given what happened to our economy, I certainly think the average consumer needs to be educated,” she says. “But making dealerships responsible for that? I just don’t know that it’s going to serve the intended purpose.”

The ones really benefiting from the rule, Grile says, are the credit reporting agencies. Because the rule encourages customers to shop for better terms, the cost for pulling a bureau (usually between $2.50 and $4) could soon be walking out the door with each deal.

“Once you add in OFAC and Red Flags checks,” Grile points out, “that cost can jump up a little bit.”

The rule will cause a major procedural change at Grile’s dealerships. Her salespeople don’t touch credit reports — a procedure she put in place because she felt it was a conflict of interest for them to have access to credit reports. With the rule’s timing requirement, that may need to change.

Where in the sales and F&I process the credit score disclosure notice is issued will depend on the dealership’s policy, which will also need to factor in Internet sales. Whatever a dealer comes up with, RouteOne’s Dan Doman, vice president and general counsel, said dealers need to consider how the rule could open the door to a more constructive conversation with nonprime customers.

“It’s going to be a reality check for some customers,” Doman says. “And it doesn’t take a real inventive individual to say, ‘Mr. Customer, you fall at the 45 range. I can help you out. I’ve sent your application to four finance sources and here are the rates I got back. Let’s see if we can’t do better.”

For that reason, Doman sees the new requirement as one that dealers should welcome.

“I think this is one of those rare federal rules that serves the intended purpose of the legislature and would be a helpful tool to the industry,” he says.

RouteOne began digesting the rule last February before engaging its lender and dealer customers in June and July. By mid-November, the company began staging educational Webinars, the last of which was held Dec. 21. The company then joined five other providers — including CoreLogic Credco, DealerTrack, Reynolds and Reynolds, and Wolters Kluwer — in releasing a solution aimed at automating the dealer exception process.

RouteOne is offering its solution as a complimentary tool within its credit application management system. DealerTrack is offering its solution for free to all dealerships on its credit application network. Reynolds and Credco are offering notices with each credit bureau inquiry report, while Wolters Kluwer is making its tool available to dealers using its AppOne credit platform.

Although she was racing against the clock, Grile has no doubt her dealership will be in compliance with the rule some said would bring the F&I process to its knees. But the work of a compliance manager is never done, especially as the industry heads into a new period of rulemaking with the Consumer Finance Protection Bureau looming large. In fact, the bureau will oversee any further rulemaking with regard to the RBP Rule.

“We’ll roll out [our RBP Rule processes] regardless of whether they put the brakes on it, because it’s the right thing to do and because it’s inevitable,” Grile says. “As for what lies ahead, there’s so much unknown. I know we were carved out of the bureau, but there’s language in there about third-party paper, and every dealer in Ohio does third-party paper. I also know they were picking on dealers located near military bases, and we have one right here in Dayton. I guess we’ll just have to wait and see what they’re going after.”[PAGEBREAK]

The FTC was pretty specific about what it expects from dealers opting for the dealer exception when complying with the Risk-Based Pricing Rule. In fact, the FTC’s 200-page rule summary includes model forms dealers can easily adapt to comply with the exception requirement — just as long as they are able to deliver the required content. The key element is the ability to show potential buyers how they stack up against other consumers in the same scoring pool, but there are 12 additional items that need to appear in these notices. That’s why software providers are offering solutions to help automate that process. Here are five companies that are doing just that:

CoreLogic Credco: The company provides an exception report free of charge with each Credco credit report ordered. The report includes model forms prescribed in the 200-page rule summary published by the Federal Reserve Board and the FTC.

DealerTrack: The DealerTrack Performance Suite offers a RBP Rule compliance tool for free to all dealerships on the DealerTrack credit application network. Dealers will be able to print credit score disclosure notices prefilled with all the required information, as well as exception notices on their lender’s behalf for two-party financing. In addition, dealers subscribed to the DealerTrack Compliance Solution will be able to electronically store and view status reports on all exception notices generated by the dealership through the solution’s dashboard and audit tools.

Reynolds and Reynolds: Reynolds is offering exception notices with each credit bureau inquiry report a dealership pulls. The notice will contain all of the text and contents prescribed by the regulation.

RouteOne: The company is offering a complimentary Risk-Based Pricing Notice tool within its credit application management system. The company also offers a two-party financing option whenever a dealer is issuing the exception notice on the lender’s behalf.