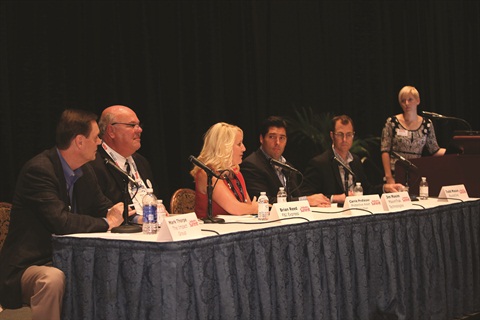 National Automobile Dealers Association (NADA) Chairman Bill Fox kicked off Industry Summit 2015 with an impassioned call to preserve the automotive retail industry as it faces overzealous regulators and rampant vehicle recalls. But it was customer dissatisfaction with the current car-buying process that had industry experts deliberating during the magazine’s September event.

Driving those discussions were studies issued by Cox Automotive subsidiary MakeMyDeal, all of which shared the same conclusion: Car shoppers strongly dislike the current process and want more of the car-buying transaction — including the F&I process — to start before they even enter the showroom.

“We’ve got to start changing the process to bring F&I out of that 10-by-10 room,” Reed explained. “… Dealers who don’t move forward will be outside the customer’s consideration set. If you’re looking for something online — whatever product it is — and you go to a site that doesn’t have what you want, you go somewhere else.”

Just one day prior to the opening of Industry Summit, F&I Express announced a solution in partnership with Cox Automotive’s first online automotive retailing company, MakeMyDeal, that allows dealers to push F&I product information online, among other things. Behind the launch was a survey showing that, while the majority of car buyers are interested in learning about F&I products (72%), they want to get that information online (71%) rather than in a dealership (29%).

Putting F&I online would represent a significant shift for the industry, said Reed. “We’ve never had information online around products,” he told attendees. “… But I think it’s where we have to go.”

Dealerships like Davis Gainesville (Fla.) Kia are already going there. In a session called “New Strategies for Online Retail That Keep You in Control,” Mike Burgiss, founder and general manager of MakeMyDeal, explained how the company’s “self-penciling” tool allows customers to calculate monthly payments with F&I products included on the dealership’s website — the F&I portion of the tool called F&I Connect.

“It’s a self-penciling tool because the dealer controls the parameters,” Burgiss noted, adding that aftermarket product pricing is determined by four factors: the customer’s credit tier, the dealer’s rates and terms on financing the vehicle, the vehicle itself and the dealer’s markup on the product. F&I Express’ digital platform also works behind the scenes by providing F&I product ratings.

But putting F&I product pricing online has been a point of contention among dealers, according to Protective’s Profaizer. In addition to compliance concerns, the executive said some dealers believe having a set price online could cut into their profit.

“I think there’s this fear of loss of control if that number is out there,” she explained.

Maxim, on the other hand, didn’t believe that posting product pricing online was the main issue. Instead, he urged dealers to set reasonable margins for profit on F&I products and use technology to enforce those margins.

“The issue, I think, really is standardization of margins around the products that you are selling in the F&I department,” he told attendees.

Maxim’s reasoning was tied to another issue that emerged at the conference: the Consumer Financial Protection Bureau (CFPB)’s rumored focus on aftermarket product pricing. During his keynote address on Sept. 10, the NADA’s Andy Koblenz acknowledged that the CFPB is beginning to navigate the “uncharted waters” of regulating product pricing.

“There isn’t a Fair Pricing or Fair Product Opportunity Act that has 40 years of decided cases to tell us where the boundaries are,” the NADA’s vice president of legal and regulatory affairs and general counsel said. In June, the CFPB added language to its Supervision and Examination Manual about ancillary products, establishing that GAP coverage, vehicle service contracts and other “add-ons” are subject to review by its examiners — although pricing discrepancies were not among the listed risks.

Koblenz urged dealers in the audience to adopt a compliance tool like the NADA’s Fair Credit Compliance Program, which requires finance managers to document why they have deviated from their dealership’s established rate markup. He said the same logic could apply to product pricing.

But during “Digitizing the F&I Experience,” panelists said some of the technology now available to dealers has the same benefits.

“You can define what markup rules you want, and you can build them into the technology, whether that is in the dealership … or online tools,” RouteOne’s Mason said. “The consumer is given a fair deal every single time based on the automated rules that are part of our online solutions.”

Implementing those rules now could save time and money down the line, panelists agreed.

“The last thing we want as an industry is imposed pricing or margin control on the products,” Maxim said. “I think that’s the worst thing that could happen to us. If we get out in front and create the standardization of how we apply markups, I think that’s the important part.”

Another study from MakeMyDeal — conducted in conjunction with F&I Express — also had panelists hailing the benefits of dealership technology. According to the “Digital F&I Experience Study,” just having a digital element in the F&I office resulted in 49% of customers being completely satisfied with the process, compared to 34% of customers who didn’t have a digital-based experience.

“Yet, as much excitement as there is to go to some type of online menu at the store or on the website, only 10% of the customers said they had an experience of an online menu presentation,” Reed said. “It really shocked me that it’s still that low.”

But panelists were skeptical that just having an electronic menu or an online presence for the F&I office was enough to win over a customer. “Anyone who believes their technology is selling products to customers is drinking their own Kool-Aid,” said the Impact Group’s Thorpe. “Because in the end, it really comes down to the F&I manager — and that interaction between the F&I manager and the customer.”

Over at the “New Strategies for Online Retail That Keep You in Control” session, MakeMyDeal’s Burgiss warned that customer satisfaction and the quality of a dealer’s digital presence are inextricably linked. According to the executive, dealers online aren’t competing on inventory and price — they are competing on authenticity.

He warned that traditional elements of a dealership’s website like payment calculators and lead forms won’t interest customers, because “you’re asking them to go first in the relationship.”

“We have to create a safe zone for people to trade information with each other about how they’re going to buy the car, and that’s what will speed the process up — build the trust — and then you’ll get higher closing rates and make more money,” he said.

One of the digital elements panelists and presenters alike recommended for winning over customers was video. In fact, on Industry Summit’s closing day, there was a full session dedicated to creating video content, called “Using Online Video to Increase F&I Product Sales.”

Led by Protective Asset Protection’s Rich Moore, the session highlighted some startling stats: 64% of consumers are more likely to buy a product after they watch a video about it, and using video on a landing page will increase conversions by 80%. However, according to Moore, most dealers aren’t taking advantage of this powerful tool.

“It’s my firm belief that the first dealerships that go out there and become evangelists as to why our products are good and why consumers should have them is going to hit a home run,” he told attendees. “We don’t have anybody in the industry right now who is really getting out there and beating the drum for us.”

Moore recommended that dealers make videos explaining each F&I product in layman’s terms, as well as videos addressing common objections to products. But his real focus was on customer testimonials.

“You need to create customer stories,” Moore explained. “When do you ask the customer to tell you their story? When they’ve had the benefit of using [the product].”

Profaizer also recommended video testimonials during “Digitizing the F&I Experience.” That came as no surprise, since 88% of consumers trust online reviews as much as personal recommendations from friends, according to a study from BrightLocal.

“We’re selling these products because consumers find a lot of value in them,” she said. “We should share those testimonials with [other] consumers so that they feel good about that buying process when they get to the F&I office.”

Thorpe, however, warned that customers who watch videos about F&I products might “come to a conclusion” about them before getting to the dealership.

“They come in prepared to say to our F&I manager, ‘Hey, I saw your video. I don’t want the service contract.’ What does the F&I manager do at that point?” he asked.

Panelists also touched on a valuable byproduct of the digital dealership experience: analytics.

Unlike brochures, electronic menus and website content accumulate data about customer engagement. That data, in turn, can help dealers do a better job marketing themselves and their products.

“In the new age of F&I, when more of this information is being pushed forward in the process and on the dealer’s website specific to their products, you can measure the clicks that a customer makes and engagement while they research the products online versus what they buy,” Reed explained.

“So this is a whole new dynamic that the F&I industry has been fortunate to use,” he added. “As you make it a more digital experience, you’ll learn a whole lot more about your business.”

It was this capability that had panelists feeling optimistic about the future of the F&I office, despite its reputation for being behind the times and producing low customer satisfaction ratings.

“I think because of the data we have available to us today, we’re no longer driving blind,” RouteOne’s Mason said.