Like most franchise dealers, Hank Sames has seen better days. Even with the reputation of having the oldest Ford franchise in the state of Texas, his dealer group wasn’t immune to the crash of the credit markets. However, the fourth-generation dealer is counting his blessings for a choice he made nearly two decades ago. It was a decision that has given him a fighting chance to survive what has been the worst economic recession since the Great Depression.

What Sames did back in 1991 was plunge his dealer group — which sells Ford, Lincoln-Mercury, Mazda and Honda — into the buy-here, pay-here (BHPH) arena. Today, his in-house finance operation generates a loan portfolio worth $27 million. It also contributes 25 percent of sales to the Sames Auto Group.

“I wanted to sell cars to everybody. I felt like we were missing a big market because of people who had bad credit,” said Sames. “And I believe that our willingness to change and do new and different things is one of the reasons why we’ve survived all of these years.”

With a degree in finance from the University of Texas, Hanes has always been a student of the world of finance. And when he started questioning why his dealership had to turn away credit-challenged customers, opening up a BHPH operation seemed like a logical next step. However, it wasn’t until he and his sales manager attended a training session and visited a BHPH dealership in Indiana that his idea became a realistic goal.

“I started thinking along the lines of, ‘Why isn’t our business run more like a grocery store?’ What I mean is, when someone walks into a grocery store, they don’t qualify them as good credit, bad credit,” he said. “And when we visited that operation and saw what they were doing, my sales manager and I looked at each other and said, ‘Golly, we could do this.’” 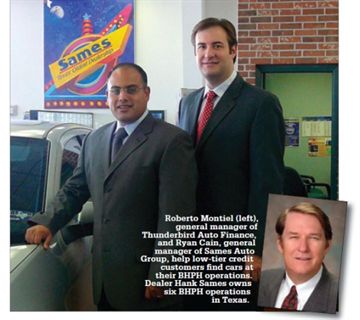 Sames invested $500,000 into his venture and put his equal-opportunity selling philosophy into practice. Vehicles that the dealership planned to sell wholesale were mechanically repaired, cleaned up and displayed on his franchised lot. “We sold them,” Sames recalled. “We had no staff. The girl who was our receptionist was our collector. She only had about five or six accounts to collect. People would come into the dealership to make their payments.”

Since making those first sales, Sames’ business has flourished into six BHPH operations in Austin, Corpus Christi and Laredo. The stores are clean, attractive buildings with plenty of good signage, all of which is meant to make BHPH customers feel respected.

The vehicles sold are 10 years old or less, and have no more than 120,000 miles. The stores currently complete about 120-150 deals per month, a noteworthy figure considering the current economic environment.

And despite the challenging economy, the recession has been a blessing in disguise, as it has weeded out competing lenders and ushered better quality customers into Sames’ BHPH operations. “There’s a lot more business out there,” he said. “But with a buy-here, pay-here operation, you have to be careful because you can run out of capital so quickly.”

Sames knows he could easily double his business, but he prefers measured growth and has to be careful not to put too much collateral on the streets.

“For dealers looking to take the plunge, I highly recommend that you walk before you run,” Sames said. “Because no matter how smart you are and how much training you get, you’re going to make mistakes.”

As business continued to grow, Sames knew his in-house finance operation needed to stand on its own and be profitable. He also wanted to take advantage of the tax benefits afforded by a related finance company (RFC). So, about 10 years ago and with a bank line of credit, he created Thunderbird Auto Finance, which finances up to $13,000 on cars and $14,500 on trucks. As for terms, the furthest Thunderbird goes is 42 months.

In addition to financing, Thunderbird sells credit insurance and places a complimentary 24-month, 24,000-mile powertrain warranty on the hoods of every vehicle sold. “Most of our competitors don’t offer anything, and we feel like it’s a real competitive advantage,” Sames said. More importantly, the extended coverage works to keep customers in their cars, as they have the peace of mind of knowing that their vehicles can be repaired.

Thunderbird currently has more than 3,000 accounts in its receivables, representing about 30 percent of Sames’ total used-vehicle sales. “We try to finance all the people that are not approved by the retail business,” said Roberto Montiel, general manager of Thunderbird. “We give customers the opportunity to finance the car through us and we establish and rebuild their credit.” 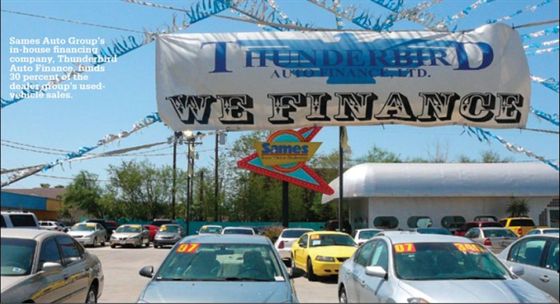 Customers must meet a number of criteria in order to get approved by Montiel and his two senior underwriters. Customers must have five familial references listed in the credit application, and must be able to afford a 25 percent down payment. They cannot have open bankruptcies or repossessions, and cannot have business-related bankruptcies. Customers must also live within a 50-mile radius of the dealership. Montiel also prefers customers who’ve lived in the area at least five years and have been employed for at least three.

And while collecting payments isn’t a problem, especially since most of his customers know Thunderbird is helping to reestablish their credit, Montiel does employ PassTime USA’s payment assurance device on each deal. He also has a team of collectors that keep track of past-due accounts.

Still, Sames said there is no real trick to a successful BHPH operation. “(Dealers) ask me what’s the trick or what’s the secret? There is no secret. There is no trick,” Sames said. “It’s hard work and you’ve got to be committed to this. That’s why I say, for somebody who wants to do this as a sideline; it’s a terrible sideline.”