Ask Malcolm Smith what title he prefers, legendary racer or successful businessman, and his answer might surprise you. “It’s businessman, actually,” he says without hesitation. Smith’s passion for off-road motorcycling is well-chronicled, but his business acumen can be traced to a story from his teenage years.

As Smith tells it, he was rummaging through the trash of a Riverside, Calif., parts shop looking for spare parts for his 1949 Matchless dirt bike. It was then that he came across a collection of price lists. Surprised to learn that shop owner Rush “Pappy” Mott was charging double the price listed on the sheets, Smith confronted Mott.

“I called him a crook,” Smith recalls. “That’s when he took me to the back and explained how things worked. I guess I was surprised he only kept six cents of every dollar he made.”

After the confrontation, Mott hired Smith to work after school and during the summer. It was that experience that opened Smith’s eyes to the world of business.

“He showed me the different things he did to make money. One thing he did was finance motorcycles,” Smith said. “He’d have customers fill out a credit application, but what he would do is get the customer’s address and drive to their house to see how well kept it was. If it was taken care of, he’d give them credit. What was amazing is he made as much money financing the vehicle as he did selling it.”

A Passion for Business

Racing was Smith’s first love, but in 1970, he turned that passion into a successful business when he opened a modest dealership and repair shop in Riverside, Calif. Today, Malcolm Smith Motorsports is a premier powersports dealership in Southern California.

For Smith, technology’s influence has been the biggest change in the business. Smith admits he’s no computer whiz, but he’s quick to say he’s a whiz at hiring people who are.

“The key thing about me is that I have the ability to hire people,” Smith said. “I’m not smart, but I know how to hire.”

It’s clear Smith’s business sense has spread to his employees.

“My theory is it costs too much to get a customer, so you’ve got to keep what you can,” said Chad Sage, general sales manager. “Listen, we’re in the business of making dreams become reality, and that’s what we do.”

Sage said current fuel prices have helped with sales. Five years ago, street-legal sport bikes made up 40 percent of the dealership’s business. Today, the category accounts for 80 percent of sales. However, the powersports industry is still down overall and Sage doesn’t expect that to change by the end of the year. That’s why Sage says the dealership’s F&I department is so critical.

“Deal structure is more important today than it was two years ago,” he says. 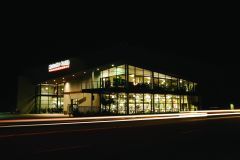 A dedicated F&I department is still rather unique in the powersports industry, but Malcom Smith Motorsports embraced it 15 years ago when it promoted Mark Decker from sales manager to F&I writer. Today, Decker serves as the F&I director. Based on his experience, he says a dealership that sells 30 to 60 units a month needs one finance person. A second manager is needed if the dealership sell 61 to 120 units a month. Monthly sales over 120 units per month requires a finance director, he adds.

About 20 percent of the dealership’s customers pay with cash or a credit card, while the remainder finance through national companies such as HSBC and GE Money. The dealership also works with several local lenders.

Despite more people paying cash these days, the writers still present a menu to every customer. This has led not only led to increased profits, but an extra layer of protection for customers as well.

Take a recent incident involving a female customer who purchased a boat from the dealership. Initially hesitant to add an extended service contract to her purchase, the woman purchased the product after the F&I department explained the program’s value. When her boat broke down and the service contract covered the $4,000 repair bill, the woman was ecstatic and became a lifelong customer of the dealership.

A big part of the F&I department’s success lies in training, which includes a mix of mini-meetings with the finance director during the day and more formal seminars with professional trainers throughout the year. The meetings serve to keep everyone on the same page, and provide an opportunity to share best practices. “This isn’t rocket science,” Sage says. “We just strive to do a common thing uncommonly well. That will lead to success in the F&I department and for the store.”

The F&I professionals who have been successful at Malcolm Smith Motorsports are team players who are organized and calm under pressure. “Our people need to be able to untangle anything the sales managers throw in the box,” Sage says.

Sage adds that he prefers to promote employees from within the dealership whenever possible to reward hard workers. He also likes to mold his people correctly rather than breaking bad habits an outside hire might have picked up from his or her previous employer.

When Sage does have to look for an outside hire, he prefers people who have worked within the industry. “Powersports F&I people usually have a passion for the sport, which makes them more effective in my opinion,” he says.

Passion is a term that is frequently heard at the dealership, which is not surprising, given the nature of its founder. “Malcolm is an incredible individual,” Sage says. “He sees everything in a walk-through that people who walk by every day miss.”

Smith has also found ways to turn his passion into an opportunity to help others. Since 1995, Smith and his wife Joyce have visited an orphanage that is home to more than 50 children at Valle Trinidad in Baja, Mexico. The Malcolm Smith Motorsports Foundation was established in 2002 and the non-profit organization has been able to provide the orphanage with a computer lab, a new well for drinking water, beds for the children and toys at Christmas. 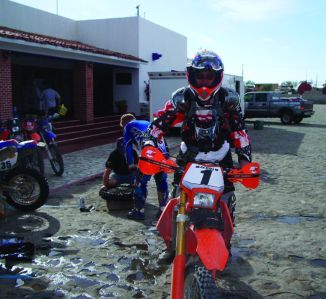 “I was really in business first,” says Smith. “Motorcycle racing was just a hobby, which is why I think I didn’t burn out.”

Smith admits that he’s not as active in the business as he once was, and says he’s comfortable with the people running it. However, it’s clear his people would prefer he remain active.

“I wish I could have worked at this dealership years ago,” Sage says. “I think I would’ve learned so much more from Malcolm and his family that would have made me a better manager and person today. Malcolm’s attitude toward life and motorcycling is contagious, to say the least.”