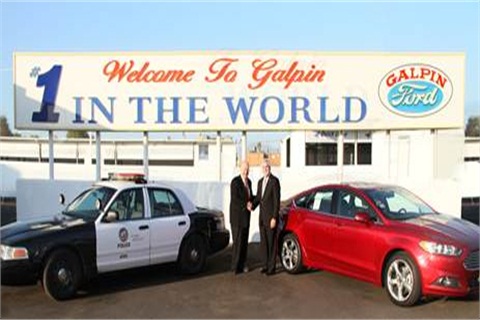 NORTH HILLS, Calif. — LoJack Corp. has entered into an agreement with Galpin Ford, the world’s largest Ford dealership for 22 consecutive years, to install the LoJack Stolen Vehicle Recovery System on its entire fleet of vehicles. LoJack officials said the deal is the largest of its kind.

“I have known Bert Boeckmann and the Galpin team for many years and they represent the gold standard of automotive retailing. I couldn’t be more proud to partner with a winning group like Galpin Ford,” said Randy L. Ortiz, president and CEO of LoJack. “It is a true win for both organizations. Since vehicle theft increasingly happens at dealer lots, Galpin Ford will now have the best protection available for its entire fleet and can readily pass that protection along to its customers who purchase the LoJack System.”

Boeckmann, owner of Galpin Motors Inc., added, “Making the LoJack System available to all of our customers is particularly important in the greater Los Angeles market, which currently and historically has ranked as one of the worst areas in the country for car theft. That’s why we are excited to offer this highly effective system to our customers while also protecting the vehicles on our own lot.”

National Auto Care will offer a vehicle service agreement for pre-owned vehicles and independent dealers in 2020.

Kasasa, LTD. adds value to their financial technology and marketing services platform through its new partnership with Carleton, Inc.

F&I Tip of the Week: One Better Question

You reach the end of your menu presentation and your customer declines every option. Now what? In this Tip of the Week, John Tabar of UDS walks you through a four-step process that helps cost-conscious car buyers discover the incredible value of the F&I products you sell.

F&I Tip of the Week: Update Your Interview

American Financial’s Dwayne Wiggins wants you to interview — but not interrogate — every F&I customer. Refresh your approach with smart, pointed questions that demonstrate value and preempt objections in this powerful Tip of the Week.

IAS is offering a new, complimentary infographic for the leadership, sales, and finance teams who want to take an active role in boosting the dealership’s per-copy average.

Used Vehicles Down 0.7% in December

Would you rather be 10 years into a career in a law firm or a dealership? Both paths lead to a six-figure income, but only one can make you a young millionaire.